You are here: Home / Games / Review: Ticket to Ride 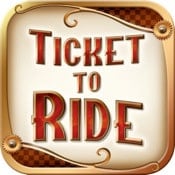 Before I met my wife, I was unfamiliar with German board games. I’d never heard of Settlers of Catan or Carcassonne. But once she introduced me to them, I was hooked. The intelligent design and mechanics of these clever games made instant sense, and I wondered why I’d never heard of them before.

Ticket to Ride isn’t technically a German board game, but it’s German-style, and will probably remind fans ofÂ Catan. Because instead of roads and resources, you’re trying to acquire railroads and routes. The game unfolds on a large board depicting the United States and dozens of railroad tracks that stretch between various major cities. You pick from available routes between those cities, where you attempt to grab the entire railroad line in between. All of the variables are handled with color-coded cards, which help you acquire the equally color-coded rail lines. Winning is designated as the player who owns the most railroads and routes when the game ends. Like all good video games based on board games, Ticket to Ride automates its gameplay mechanics beautifully. The cards are dealt, rail lines are claimed, and routes are proffered entirely by the computer, leading to a fast-paced experience that simply isn’t possible with the board game. The iPad game allows for anywhere between two and five players at a single game, and gives you the option to play locally against built-in A.I., or online against real-life opponents (who are matched randomly via Game Center or the game developer’s own login system). It is a bit of a bummer that there’s no local multiplayer, but it’s easy to see how this would be difficult to make work on a handheld device. Everything about the game design is splendid, recreating the turn-of-the-century charms of the board game with great attention to detail. The colors pop, the board and cards are reproduced faithfully, and the interface is neatly organized. There’s a built-in video tutorial that does a very good job of explaining how the game is played, and there’s even a tutorial mode that will hold your hand, guiding you through your first time playing. I’ll admit it did take me a good ten or fifteen minutes to grasp the basics of how the game is played, but that’s pretty normal for German-style board games. And once I got it, it stuck. I haven’t had to refer back to the tutorials after that initial encounter. So don’t let the learning curve stand in your way. My only complaint about the game’s design is a quirk of the menus. A helpful character shows up on each menu screen to give the game added flavor and personality, explaining what your options are on that screen. But once you’ve heard what they have to say, it would be nice to not have to hear it again and again and again every single time you return to that menu screen. Hopefully this little oversight will be addressed in a future update.

Add-ons to the game are available to purchase in-app, which will expand your available railways or even open up entirely new game boards for you to play on. Every time you play, it’s a randomly generated experience, and with so many variables, the outcome is always different. It makes for remarkably addictive fun, so much so that despite a few very minor drawbacks, I still give Ticket to Ride my highest recommendation. It’s one of the most enjoyable iPad games I’ve ever played.