by Robin Parrish 12 years ago10 months ago
6 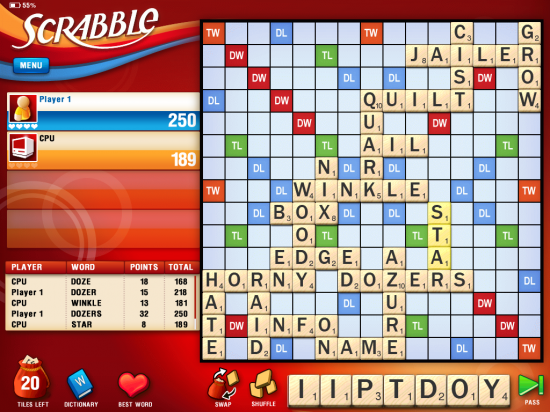 EA Mobile’s Scrabble for iPad is a lovely translation of the popular board game that makes excellent use of the iPad’s extra screen size. It couldn’t be easier to play: you just grab a tile with your finger and drag it onto the game board to the spot where you want to place it. It’s a simple, obvious game mechanic that makes playing this classic game even more fun than the old school method.

There are five different game modes, though each features the same basic gameplay mechanics. There’s the solo game, which allows you to either play against an AI opponent or a simplified solo game where you’re the only player and it’s always your turn. There’s a local network mode, where you can face off against other Scrabble for iPad players on other iPads on your same network. “Pass’N Play” is the same basic idea, only you play against other opponents on the same iPad. This one relies on the honor system to ensure that no one looks at their opponent’s letter tiles. 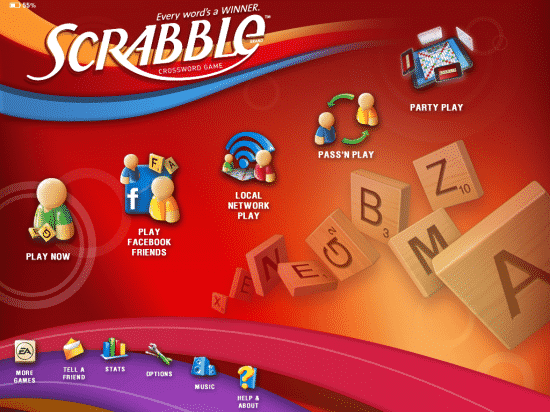 The “Party Play” mode is one that’s gotten a lot of hype because it lets your iPhone or iPod Touch interact directly with the iPad game, and serve as your personal tile rack. In this way, up to four players can take part in the same game (assuming they have four spare iPhones between them) and the iPad serves more as a traditional board game, centered in a stationary position between the players. The last mode is particularly nifty, letting your iPad game interact directly with the Facebook version of Scrabble. Challenge your Facebook friends to a game, and they’ll take their turns on Facebook’s app while you play your turns from your iPad.

For each of these modes, there are several different game styles, such as Classic, 75 and 150 point games, and set numbers of rounds of just 8 or 12. In solo mode, you can play on Easy, Medium, or Hard settings, but be warned that the AI can be very challenging even on the “Medium” setting, often drawing words out of the dictionary that you’ll never have heard of. Another option lets you use the built-in music or have the game play from your music library (or play nothing at all, if you prefer). 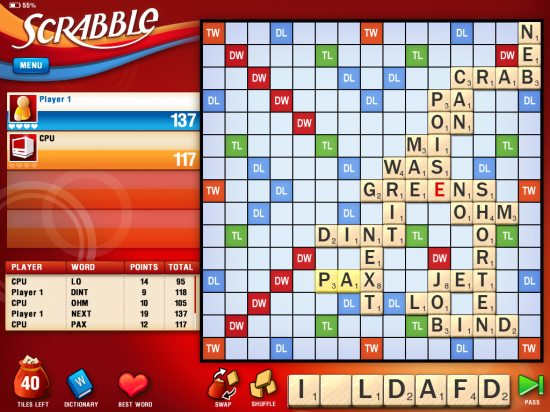 The game board is attractively rendered, putting your tile rack and all other game options right at your fingertips. A small scoreboard displays all the stats from your current game, which is helpful if you looked away from the game during your opponent’s last turn and didn’t see what word they placed or how much they scored. A dictionary button comes in handy when you’re not sure if your planned word is actually a word. A “Tiles Left” button displays a list of all of the remaining letters that haven’t yet been dispersed to players. And the “Best Word” button will search the dictionary and match your tiles to the best, highest-scoring word you can possibly place on the board; the catch is that you can do this no more than 4 times per game. A pair of buttons by the tile rack let you shuffle the tiles at random or swap tiles, which just like in the board game, forfeits your current turn.

At the top left of the screen, you’ll find a thoughtful inclusion that most iOS games never bother to provide: a battery icon that displays how much power you have left on your device. This is especially helpful since the game tends to drain your battery faster than you’d expect.

There’s not a whole lot I can say that’s negative about Scrabble for iPad. It does exactly what you expect it to do with a crisp, clean interface and no glitches that I could find. It’s just extremely well done.