You are here: Home / Apps / Office for iPad Submitted to App Store 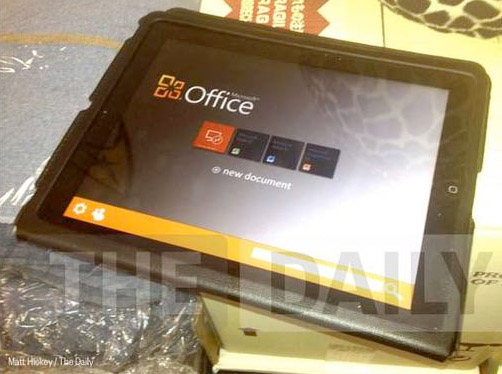 Is the long-awaited Microsoft Office for iPad imminent? Sure looks like it. I wonder if Apple might be planning something special for its launch…

The Daily reports that Microsoft has submitted Office to the iTunes App Store for approval. Will we soon be running Word, Excel, and Powerpoint on our iPads? The Daily seems to think so.

They even claim to have (somehow) gotten their hands on a working prototype of the software, suggesting that the UI is similar to Microsoft’s OneNote app, with some “Metro” bits thrown in. Metro, in case you don’t know, is the sleek, touch-friendly design interface Microsoft is implementing in Windows Phone 7 and the upcoming Windows 8. The Daily also points out that you’ll be able to create Office files and edit them both locally, saving them to your iPad, and online, saving them to the cloud.

So now we know it’s coming soon. The only remaining big question is now: how much will it cost? Apple charges $10 a pop for its productivity suite of apps — Pages, Numbers, and Keynote. That sets a $30 precedent for the whole package. Will Microsoft answer in kind, with a $30 app? Might Microsoft choose to make Word, Excel, and Powerpoint available to purchase individually, instead of all in a big bundle? (There are certainly plenty of those who only one or two of them, instead of all three.)

Here’s a provocative thought: the iPad 3’s announcement is expected around March 7th, putting it about two weeks away. Two weeks could be an appropriate amount of time for an app of this significance to make its way through Apple’s approval process. Is it possible? Could it be? Might Apple and Microsoft actually (gasp!) be working together, planning to formally announce Office as a premiere iPad 3 app, at Apple’s big media event in two weeks?