by Alexander Fox 6 years ago8 months ago
1

Like a lot of folks, I use my iPhone to wake up in the morning. However, it’s not so great at the job: the built-in app for alarms, prosaically named “Clock,” is pretty pitiful. It used to be better, but the recent shrinking of the “alarm stop” button to comically un-tappable proportions while simultaneously upsizing the snooze button to a third of the screen made me start to wonder if the app really had my best interests at heart. So, I set out to sail the seas of alarm clock apps, and I now share with you my bounty.

But first, a fair warning: I do not consider and alarm that harasses you into waking up to be somehow “better” than a regular clock. It’s like they thought Doc Brown’s alarm clock experiment from the first Back to the Future movie was a great idea and decided to recreate it. Having to shake my phone for 30 seconds or take a picture of my stove to turn off the alarm is like having my mom yell at me to get ready for school: helpful when I was 16, infantilizing now.

If Apple wanted to create a truly excellent alarm clock, I have a suspicion they would create something strikingly similar to Sleep Cycle. The app goes beyond setting a time for a loud noise to go off. Like an overly-attached girlfriend, Sleep Cycle analyzes your snoozing in an effort to find the best point in your sleep cycle to roust you. If you’ve ever had a day where you woke up feeling like the “after” part of a Nyquil commercial, then you know how it feels to wake up at the right part of your sleep cycle. Sleep Cycle is trying to make every day that great. You set your alarm time, and Sleep Cycle will try to find a time between wake-up time and T-minus 30 minutes to rouse you gently.

Unlike a lot of other apps that try to pull this sleep-creeping thing off, Sleep Cycle uses the microphone to track your movements rather than the accelerometer. This is good, because accelerometer tracking is normally garbage. Sleep Cycle’s tracking isn’t perfect, though. While it tracked my sleep reasonably well most nights, that didn’t mean it always knew when to wake me up. It does seem to be more effective than a regular alarm, but I’m a sample size of one, so it’s hard to say that confidently. But when it works, man does it work: I’m gently disturbed from my slumber like a happy giant, pleased with the trilling of the birds outside his window and ready to seize the diem.

Sleep Cycle can also report your sleep activity to Apple’s Health app, and you can explore your sleep history in the app’s Statistics view. 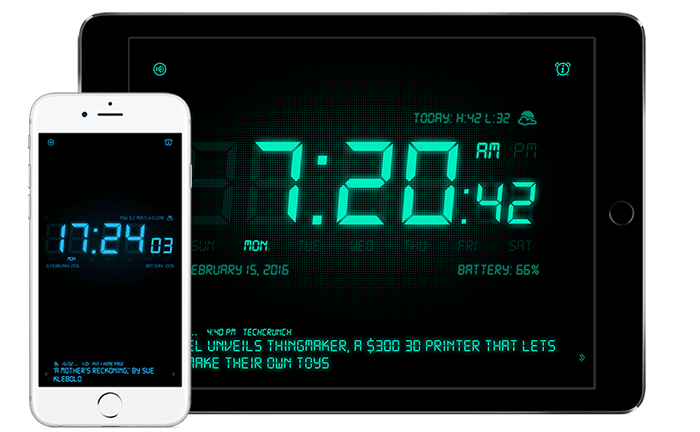 For the purists among us, I submit Alarm Clock HD. It’s a perfectly serviceable if utilitarian alarm clock app that does what it says on the box. While open, the app shows you a clear, if rather retro, LED-style clock with the current time. Alarms can be easily added and set to ring off with a variety of custom tonesor music from your iTunes music library. Like a number of other apps, it also includes local weather with your morning alarm, and allows you set a wide variety of wake up and reminder alarms with helpful labels like “go to the gym” and “go to sleep already.” And final nice touch is a quick access flashlight function, which is perfect for lighting the way to the loo.

The one odd thing is that the app seems to expect you to keep it open and on while you’re asleep. This is a delusion common to a number of alarm clock apps, and I have never known a soul who does this. The greatest downside of LED clocks (at least for insomniacs like myself) is that they’re on all the time, glowing in a damning indictment of the fact that you haven’t yet fallen asleep. Fortunately, the app works perfectly fine while the phone is asleep and charging.

For the Zen: Music Alarm Clock 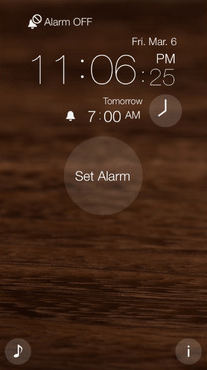 Music Alarm Clock is a very simple app. It assumes you only need one alarm, which is true for some folks. The app uses an outrageous circular interface called a “clock” to set the alarm time, and I can’t believe this isn’t omnipresent. Scrolling through a menu to set the time feels like I’m driving a car with levers instead of a steering wheel. Music Alarm Clock includes a small but decent library of environmental sounds to wake up and fall asleep to, and you can use music from your own library as well. But if you want it to do anything else, you’ll be disappointed: it’s a one-function kind of app.