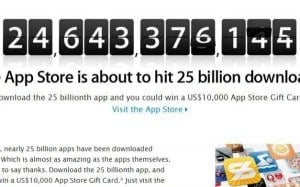 Over the weekend, Apple announced that the 25 billionth app was downloaded. The winner of the contest that Apple held to commemorate this milestone was Chunli Fu, who lives in Qingdao, China. Fu was awarded an iTunes gift certificate worth $10,000 that he can use in Apple’s online stores.

So what was the app that marks app number 25,000,000,000? It was Where’s My Water, whichFu downloaded on March 2. It took about two weeks from the day Apple announced the contest to reach 25 billion downloaded apps.

Apple’s Senior Vice President of Internet Software and Services Eddy Cue thanked all of the company’s customers and developers for helping apple reach the 25 billionth app milestone. “When we launched the App Store less than four years ago, we never imagined that mobile apps would become the phenomenon they have, or that developers would create such an incredible selection of apps for iOS users.”

The fact that a game was the app that reached the magic number is seen by many as almost predictable. Gaming apps are probably the most popular app genre in the App Store because it is something that is enjoyed by people of all ages and does not present any language barriers that could impede with its use or people’s enjoyment.

Apple has also released the top 25 best selling or most downloaded free apps in the App Store. Games also dominated the list for paid iPhone apps, with nine out of ten of the apps being games. The top paid app was Pages, a word processing app that is part of the iWorks suite.