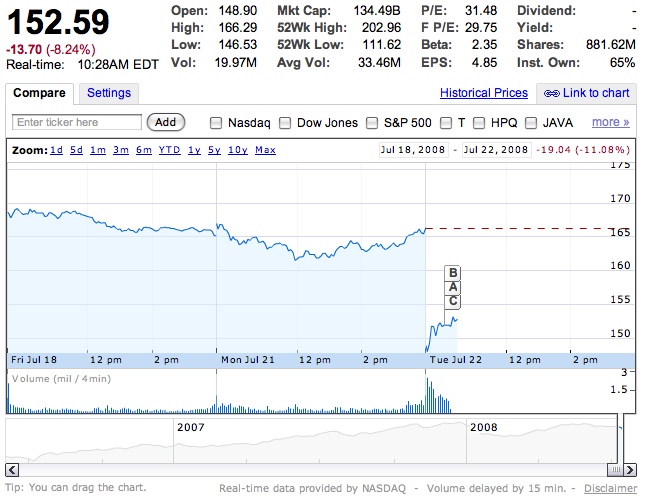 Mac sales are the best they’ve ever been, iPhones are selling like crazy, and Apple reported a profit of over $1 billion dollars for the third quarter of 2008.

So, of course, the their stock is tumbling.

Apple’s stock has seen its biggest drop in 6 years after the conference call yesterday afternoon mapped out some of Apple’s plans for the future. There was also discussion of CEO Steve Job’s health – and apparently stock holders didn’t like the answer they received.

When asked about Steve’s health Apple CFO Peter Oppenheimer stated “Steve loves Apple. He serves at the pleasure of Apple’s boar…he has no plans to leave Apple. Steve’s health is a private matter.”

That’s not a terribly encouraging answer, and is sure to fuel the fires of speculation about Steve’s over all well-being.

Another element to fuel speculation was Apple’s mentioning of a “product transition” that would be offered at price points competitors can’t match. Lower prices mean lower profits, and stock holders are jumping ship.

The “product transition” statement has already fueled the fires of speculation, with many siting long rumored redesigned Macbooks and Macbook Pros as the “mystery product”. While, we may certainly see a new Macbook line in the near future, Apple has never been a company that sold their computers on the cheap…so I seriously doubt that’s that they’re talking about.

I think its far more likely that the company is referring to a transition in the iPod market. Let’s face it – they’ve sold so many of those things they’re really going to have to kick it up a notch to keep consumers interested.

Whatever the case may be, Apple’s stock is on a huge downward spiral today which will most likely level out soon…then start climbing back up. Apple’s stock routinely falls after their quarterly reports come out…so now might be a good time to buy.