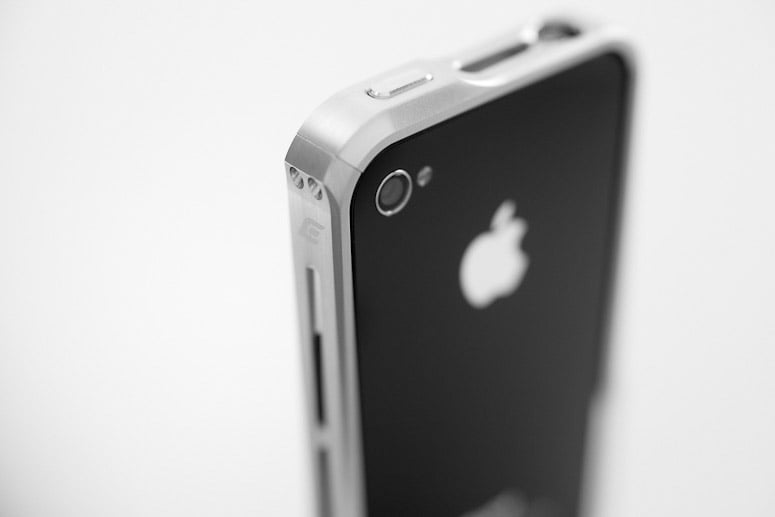 I’m a huge fan of Element Case’s products. Their Vapor Dock got my attention in a big way a short while back, proving itself the cream of the crop for iPhone docks. Let’s take a look at the iPhone case that’s made to complement the Dock: the Vapor Pro.

The Vapor Pro might just be the ultimate “bumper” case for your iPhone. Made almost entirely from industrial-grade aluminum (there’s a small polymer plastic piece), the feeling it creates when you install it on your phone is really quite remarkable. Without adding any real weight, the case makes your phone feel tremendously solid, as if the case and the entire phone were carved together from a single piece of granite.

Element says that the Vapor Pro is “precision machined” — which sounds similar to the process Apple uses to carve out its aluminum MacBook unibodies. There are holes on all four sides for the various ports and buttons on your phone. These holes are plenty big for anything you need to do with your phone. I tested out the popular Square credit card reader in my headset jack, to ensure that it would plug in far enough to work. The Square card reader fit perfectly, nearly lining up flush with the frame. In addition to the tactile feel of it, I also have to point out the Vapor Pro’s aesthetic appeal. The photos don’t do it justice. The case is just beautiful; it’s sleek and modern and it oozes cool. It’s impossible to turn away from when you see it in person. Not a single individual who’s seen mine in use has failed to comment on it positively, or ask about it.

With Element’s new online customization tool, you can now mix-and-match colors and materials to create the perfect iPhone case for you. The fully-featured “Design Studio” tool starts by letting you select the iPhone you have — black or white. Then, using a visual editor, you can fashion six separate options to suit your tastes, with up to 16 colors available for most of them, and see exactly what it will look like. There’s the “Frame,” the solid L-shaped piece that covers the right side and extends down to cover the bottom. Then there’s the “Cap,” the corresponding piece that covers the top and part of the left side. There’s the “Bridge Insert,” the extra-thick piece that keeps your fingers off of that pesky antenna spot. This one can also be transparent if you prefer. And then there’s the “Ultrasuede Back Plate,” an adhesive that sticks on the back of your phone for protection. (Ten bucks extra gets you a swanky carbon fiber back plate.) You can pick gold, black, or silver screws, and Element even lets you choose from four different colors for the power button.

There are literally hundreds of color combinations possible, so you’re limited only by your tastes and imagination. Sorry, pattern lovers, there are none. It’s all solid colors, but I suspect this was a conscious choice to keep the final product from being too busy. The case also comes with a screen protector, but I opted to skip this, as I prefer to touch the glass itself. The extra-thick "Bridge Insert" that covers the antenna

Speaking of what comes with the Vapor Pro, the packaging alone is a thing of beauty. Steve Jobs‘ heart would skip a beat upon opening this box, seriously. It has a magnet on one side to hold it when you flip it closed (like a book cover). After you take out the metal case — which is housed around a plastic frame — underneath you find a nice surprise. A really nice black canvas zipper case that encloses your entire phone waits there, and it’s lined with foam. There’s a small square of fabric for cleaning your phone’s screen, and some Element Case stickers (a la the white Apple logo stickers you get with Apple’s products).

For the case I customized for this review, I went with a gun metal matte Frame, a white powder coat Cap, a clear Bridge Insert (the only piece of plastic anywhere on the case), a black Back Plate, silver screws, and a black power button. Sure, I could’ve gone in a more colorful direction, but I thought the monochrome palette would be a nice compliment to my white iPhone 4S. Turns out, I was right, and not just about the colors. I also mixed up the finishes, with the smooth, glossy powder coat on one side, and the matte “Flux Finish” on the other. It created a fascinating mosaic of textures, that not only make the case interesting to touch and hold, but it also helps me know the orientation of my phone when I pick it up — without looking at it. The only thing I can complain about is the screws. Four tiny screws are required hold the case together. You have to unscrew them to get it apart, and then screw them back in when you install the case onto your phone. I sat at my dining room table, in the most well-lit room in the house, and took my time with it. And still I managed to lose two of the darn things in my carpet. The screws aren’t small; they’re microscopic. They’re smaller even than the screws in most reading glasses. Element thoughtfully includes a special “Vapor Speed” screwdriver to take the screws out and put them back in; this tiny tool, which is shaped sort of like a teeny flashlight on a keyring, also includes two extra screws. Which is a good thing, or I wouldn’t have had enough screws to hold the case together. I really wish Element had found a more elegant solution than screws for holding the case together.

Once my case was attached, I was a little surprised that it wasn’t quite the perfect, seamless fit I was expecting. Looking at the front of my phone, I can see the side edges of my phone between it and the case. It’s like there’s a miniscule fraction of space in there between the two. But let me emphasize that this is purely cosmetic. The case is very solidly affixed; it’s not going anywhere, and nothing shakes or rattles when I move my phone. The screws that nearly became the bane of my existence

Anyone who’s perused Element’s products knows that their stuff doesn’t come cheap. But there’s a reason their products are considered top-of-the-line. They make soulful accessories that are art, while still maintaining strength and usability. Element takes Apple’s own design philosophies to heart, while putting their own touches on the end results.

I haven’t performed any major protection tests on the case (what, you think I’m going to just drop my iPhone — on purpose?), but I’m more than satisfied with my use of the Vapor Pro case — despite that caveat about the screws. It’s a stunning product regardless, and my iPhone has never felt safer — or cooler.