How to Fix the Most Common Printing Issues in OS... 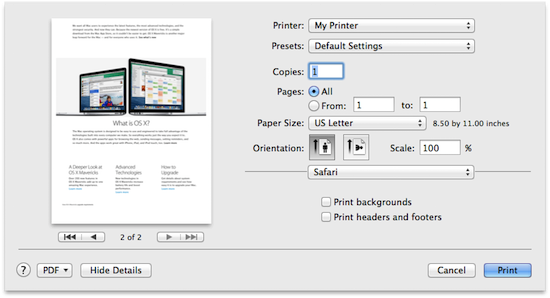 One of the best features of OS X has always been its ability to make installing and using printers incredibly easy. Apple’s operating system has built-in support for hundreds of printers from dozens of manufacturers, which means most of the time they work simply by plugging them into our Mac. As powerful and robust as these printing subsystems are however, problems can still arise from time to time. Here are some common printing issues in OS X, and how to solve them.

Perhaps the most common printer related issue that Mac users face is a failure for a document to print when requested. This can occur for a number of reasons, and is usually very easy to fix. Often times your computer’s memory can be filled with too much data. You might have multiple applications running for instance, and perhaps several large documents are open as well. With those files occupying a significant portion of the RAM installed on your computer, OS X doesn’t always have all the resources it needs to successfully complete a print job, even though it appears to have sent the document to the printer as usual. Restarting you Mac will almost certainly clear up this problem, and free up the memory necessary to get the printer working again. In fact, restarting your computer will often fix a variety of problems, and should almost always be your first choice when troubleshooting strange behavior.

Another common Mac printing issue is that the printer fails to respond to any applications, even after the computer has been restarted. It still appears as an option when you hit Command – P, but it never prints out any of the documents that you send its way. Often times, those documents will just end up sitting in the printer queue, waiting to be processed. Most of the time, power-cycling the printer will fix this problem, although not always. If turning the printer off, and back on again, doesn’t solve the issue, users generally need to delete the printer, and re-add it in system preferences. Before that can happen however, you should first clear the queue  by opening System Preferences, selecting “Printers & Scanners,” and then double clicking on the printer from the list that is displayed. A new dialog box will open showing the documents that are waiting to be processed. Click on each of them, and delete them from the queue. Next, return to the Printers & Scanners preference panel, and click once on the printer, and push the minus button at the bottom of the dialog box. This will remove the printer from the list completely, and allow you to re-add it once again. I generally recommend restarting the computer before re-adding a printer, although that isn’t always a necessary step. 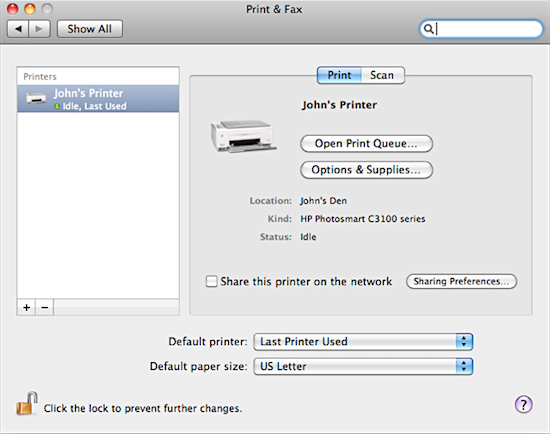 Modern printers, such as the sophisticated devices offered from Konica Minolta, often have a wide variety of extra features that extend their functionality further than ever before. For instance, many have built-in scanning capabilities, or can be used as copiers too. They can also connect wirelessly to our networks, and even share files directly from the printer back to our computers or with friends via social media. But often times Apple’s built-in drivers don’t cover all of that functionality, as they are designed for very basic printing needs. Should you find that a specific feature of your printer is not working as you would expect, or isn’t available at all, go to the printer manufacturer’s website and download the latest version of the drivers designed for your specific device. Those drivers are generally more robust than the ones that Apple includes in OS X. Once installed, they’ll likely activate the feature that you are looking for.

If you’re using a networked printer, it can introduce an entirely new level of challenge for troubleshooting, since any issues that arise are no longer just between the Mac and the printer itself, but could involve the network as well. Often times when a printer fails to appear on the network however, it is due to the device’s built-in network card not functioning as it should. If the printer had been configured properly and working in the past, chances are it simply needs to be power-cycled to begin working once again. Turn off the printer, wait a few seconds, and turn it back on again. Once it has gone through its start-up sequence, it should automatically initialize its networking features, and reconnect to the network.

There are a wide variety of other issues that can occur with printing from your Mac, but the above options generally fix most of them. If you find restarting your computer or printer, updating drivers, or re-adding the printer don’t solve your problem, then perhaps reseting the OS X print system will do the trick. This option does a variety of things, including deleting all queues and print jobs, resetting all printer preferences to their default settings, and even checks the permissions on the /tmp directory where documents are temporarily stored while being spooled to the printer. In other words, this it the thermonuclear option for fixing a wide variety of printer problems. To perform the reset, open the System Preferences and select “Printers & Scanners” once again. Right click or control-click on your printer, and when the contextual menu  appears, choose the option to “Reset printing system…” The operating system will automatically do everything it needs from there. Once the reset is completed, you’ll have to recreate any specific printer settings that had been saved, but any number of odd behaviors from your printer can be fixed in this way.