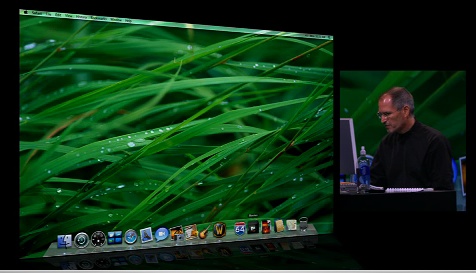 You know, expectations always lead to a letdown.Â  It happened to just about everyone in the world when Star Wars: Episode One was released…it happened when M*A*S*H ended…hell it happened when my father saw Forrest Gump for the first time. Expecting something to be amazing and/or unforgetable almost always leads to disappointment.

So, it’s no surprise to me that I felt slightly disappointed after the Keynote yesterday.Â  I expected more.Â  I think everyone did.Â  It doesn’t help when idiots like me are making predictions, and Wired magazine is predicting the “biggest UI change in 30 years”…that’s incredibly hard to live up to…even for Apple.

After the Keynote I waited and waited for the feed to come online so I could get a better look at the presentation, but it didn’t appear until late in the evening, and when it did, it was streaming Quicktime (which is the one portion of Quicktime I don’t think Apple has ever gotten right, and is a personal hatred of mine).Â  So, unable to watch a quality version of the WWDC Keynote, I decided, instead, to watch the Keynote from Macworld this year.

After skipping all the financials, skimming over the AppleTV (hey, I was watching it on an AppleTV, I didn’t Jobs to tell me what it does again)…I finally got to it.Â  The Perfect Hype-Storm.

After watching the Macworld Keynote, along with the “How To…” commercials for the iPhone, I am fully incased in the reality distortion field around the product.Â  As the Wi-Fi chugged along slowly in the Keynote, I found myself saying “I’m sure it’s just a slow connection…it’ll work great a my house.”Â  I refuse to believe anything negative about the iPhone until I see it for myself.Â  The Reality Distortion Field has me within it’s grasp.

And that’s when it hit me…that’s why I’m disapointed with the WWDC Keynote…and that’s why you are too.Â  There was no Reality Distortion Field yesterday.Â  Steve Jobs didn’t need it.Â  Instead of showing us an unbelievable product that we have to have great faith in until we can see it for ourselves, Jobs gave us an OS update.Â  It looks like a good OS update…hell, I think it looks GREAT – but it doesn’t give us anything to really drool over and live in anticipation of.

Most of us had decided that Leopard was going to be as revolutionary as the iPhone appears to be.Â  That’s what we wanted to see, but that’s not what we saw…what we saw, instead, was a solid looking OS update that I think we’re all going to be very happy with.Â  Will it change the world?Â  No.Â  Is it better than Vista?Â  Can’t officially say yet, but since Tiger is already better than Vista, I don’t see how it couldn’t be.

I’m more excited about Leopard than I was about Tiger.Â  Especially after watching the demo videos on Apple’s site.Â  I actually think, in retrospect, that this was a really great Keynote.Â  It did exacty what something like this should do…it showed developers the new OS they are going to be developing for.Â  It wasn’t overly hype filled.Â  It didn’t leave the whole world filled with anticipation and a ridiculous anticipation of the product…instead, I think it left us with a “that’s going to be cool…” kind of feeling.Â  It did for me, anyway.

I’m looking forward to October, so I can get my hands on Leopard….but I CAN wait for it to get here…and I think that’s a good thing.