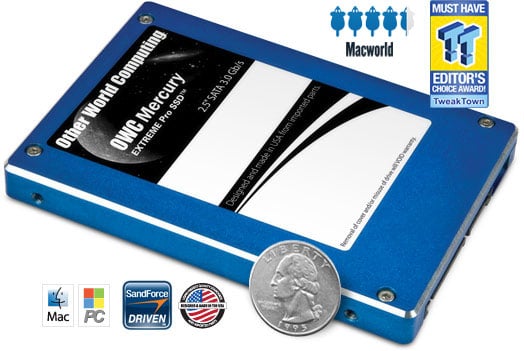 I’ve got a bad case of “Ineedanewcomputeritis,” and it’s driving me nuts. A few months back, I upgraded the internal hard drive on my 15-inch MBP with a 500GB, 7200 RPM model, and I was pretty happy. But as things tend to go, as time went on, my hard drive got fuller and fuller until I was left with about 100GB of free space. Although this is more than enough for many people, it was slowing down the computer and was a problem waiting to happen. On top of that, my MBP seems to run pretty hot. It’s not uncommon to see the temp dip up to the 160s, and to hear my fans whirring away at excessive speeds for long periods of time.

A week or so ago, a buddy of mine decided to buy an OWC SSD drive and install it in his MBP. The results were ridiculous. Not only does it boot insanely fast, but the temperatures went down as well. After talking to him a bit about it, he told me that he chose the OWC drive over another model because OSX doesn’t have support for TRIM, but the drive compensates for that. How? I’ve got no clue. But the point is, it’s not supposed to have any degradation in speed over time like some SSDs.

This is an attractive option to me, and something I’m considering. But the cost of entry is pretty steep – $599 for the 240GB model I’m looking at – plus it’s a matter of reliability. I rely on this computer for everyday use. If it starts slowing down or has a problem with the drive, I’m SOL. Granted, this could happen with any HD, but still, SSDs are relatively new technology. I hear about them dying all the time.

So to you, our intrepid readers, I pose this question: Is an SSD upgrade worth it, and does it last? Let me know in the comments.