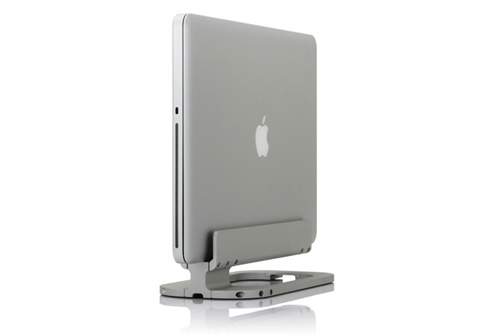 I’m a huge fan of docks, but when I saw this one, I wasn’t quite sure what to think. Why? Well I’ve seen plenty of MacBook Pro docks, and there are certainly prettier ones out there, that’s for sure. Plus they’re cheaper, but we’ll get into that in a minute. What makes this dock – the Floater T3 – so special?

First thought is the cutouts in the base. Those are designed to hold your cables, which keeps them neat in the process. Second is the minimal coverage to your MacBook, which allows it to cool off as optimally as possible. And … that’s it. Frankly, at $298, it’s a bit too pricey for me, and I can’t see any reason to buy it over anything by TwelveSouth.

On the other hand, the same company also offers the WoodServe. That’s a very similar MacBook stand, but it’s made mostly from wood and only runs $89. Still expensive, but it’s nowhere near the mammoth hit on the pocketbook.

Either way, if you’re looking for a dock for your MacBook, here’s another pair of options. I wouldn’t spend the money on one, but then again, I don’t like gold iPads either.