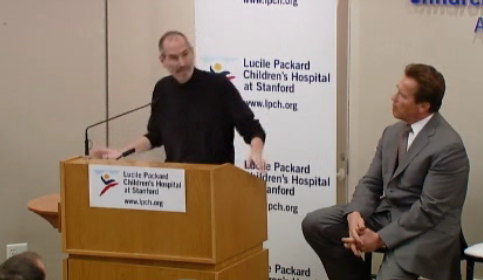 Just one year ago, Steve Jobs had a liver transplant, prolonging the life of a man that most people feel is solely responsible for changing the Apple world as we know it. For a long time there, we weren’t sure what was happening to him, or if he was even going to survive much longer, and now everything seems to be going well. This gift of life hasn’t been lost on Steve, so the other day, he spoke out about California BillÂ SB 1395. What’s that you ask? ZDNet has the answer:

Marking the one year anniversary of receiving his liver transplant, Steve Jobs made an appearance at the Lucille Packard Childrenâ€™s Hospital with Governor Arnold Schwarzenegger to unveil California BillÂ SB 1395. The new bill which requires the DMV to ask you if youâ€™d like to be an organ donor. It also allows you to check a special box on the DMV registration/renewal forms to donate your organs, rather than the current system which requires filling out a separate form.

I have a personal connection to the organ donor program myself. My little sister had multiple problems and was about to go through a heart valve transplant just a few weeks prior to her passing in 2007. Because of her health conditions, the day I got my license was the day I signed up as an organ donor, because I knew that if I died, I could help save someone like her. It was real easy in Arizona – the state where I live – but in California, it’s apparently a bit of a process. Getting that fixed is a good thing for everyone and I hope it goes through.