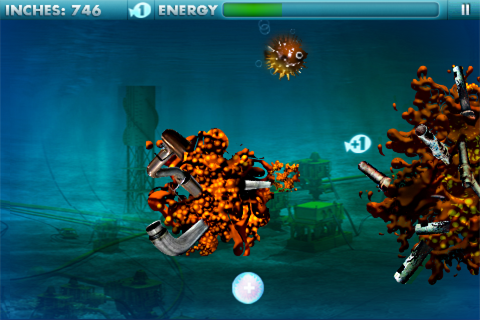 So back when the gulf oil spill took place, somebody thought it would be a good idea to help raise funds for the cleanup by creating an iPhone game themed around the disaster. (Yeah, I really just typed that.)

Puff Puff is the result, a simple little side-scroller that finds you steering a blowfish through the dirty waters to try and avoid the oil spill and other hazards. In addition to the spill, there’s also a healthy coral reef to play through, but there’s no difference in the gameplay at all — only different ocean-y backdrops and dangerous things to avoid. In either game mode, there are power-ups, shields, and lightning bolts to run into in order to get bonuses like extra speed and extended time in a single level. 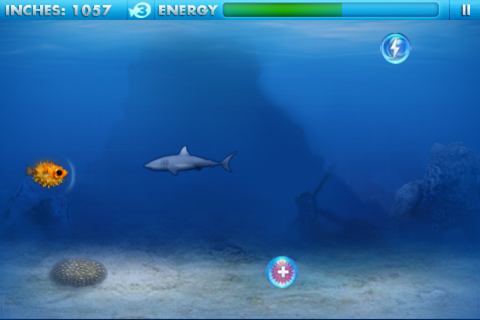 The control scheme is one of the game’s worst aspects (which is saying something). Holding your iPhone in landscape mode, you pinch your thumbs together at the bottom of the screen to make the blowfish contract in size, causing it to dive. If you spread your thumbs (like you’d typically do to zoom in on a photo), the blowfish will blow up and you’ll float upward. That’s basically it. I found the responsiveness of the pinch-and-zoom scheme sorely lacking, and often the cause of my blowfish’s downfall. Even when it does manage to respond, the dive or climb action happens too slowly to be all that helpful. 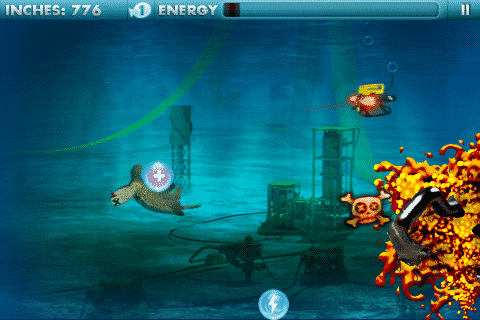 Your blowfish starts off at the left side of the screen but occasionally wanders over to the right. And since you’re side-scrolling in toward the right, that means the the objects you’re supposed to avoid and targets you’re supposed to hit appear less than a second before they’re in striking range. It’s salt in the wound of such a poorly-conceived and constructed game.

I’m willing to give anything a good, fair-minded try, but after multiple play-throughs, I’m afraid I found nothing worth recommending aboutÂ Puff Puff. It couldn’t have possibly required more than a day or two to put together. Its lack of ambition isÂ unforgivable, and it suffers an utter absence of creativity. 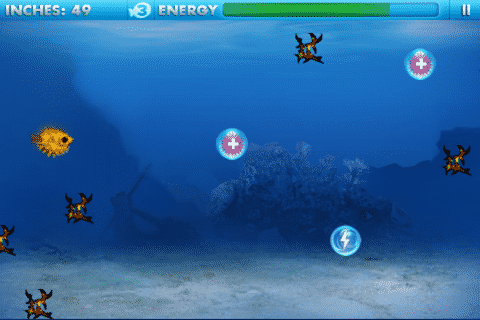 There may be plenty of tremendous values in the iTunes store — games that give you tons of bang for very little buck. ButÂ Puff Puff is $.99… and you get exactly what you pay for. Maybe less. OnlyÂ narcissistsÂ need apply.

If you want to help with the gulf oil clean up, just make a donation.