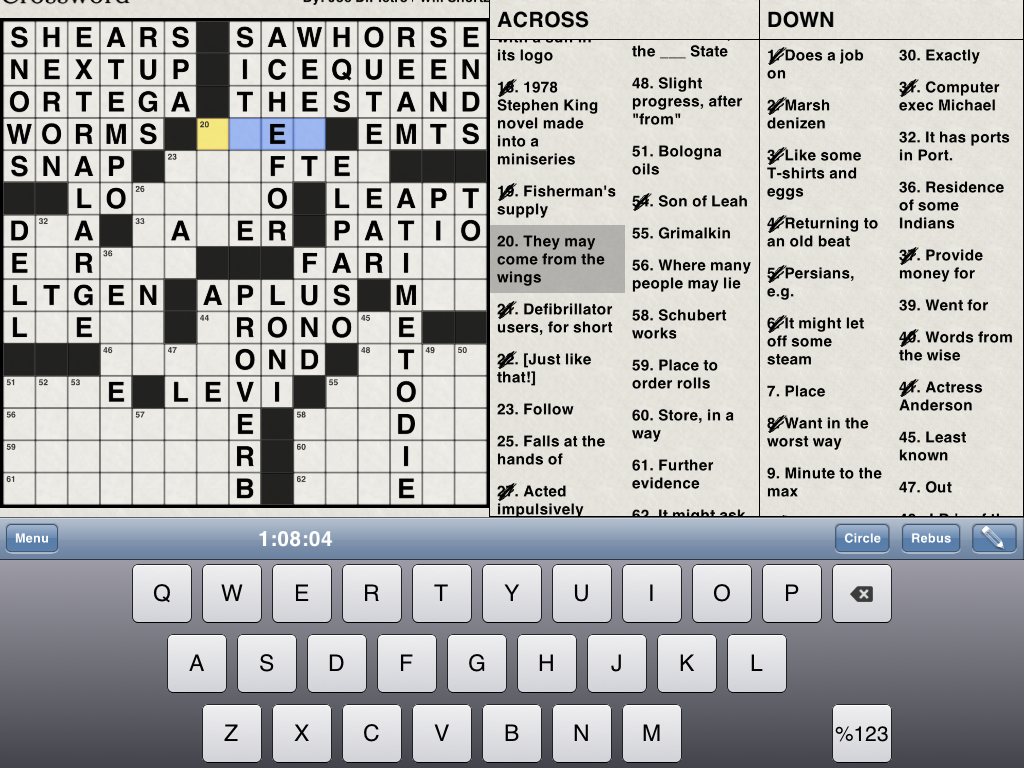 The New York Times Crosswords app is exactly what it sounds like: an app allowing you to do the Times‘ crossword puzzles on your iPad.

For a subscription fee, the daily crosswords from the newspaper will be sent to your iPad, though the app itself is free, and it comes bundled with thirty free puzzles, comprised of favorite puzzles going back to 2002. 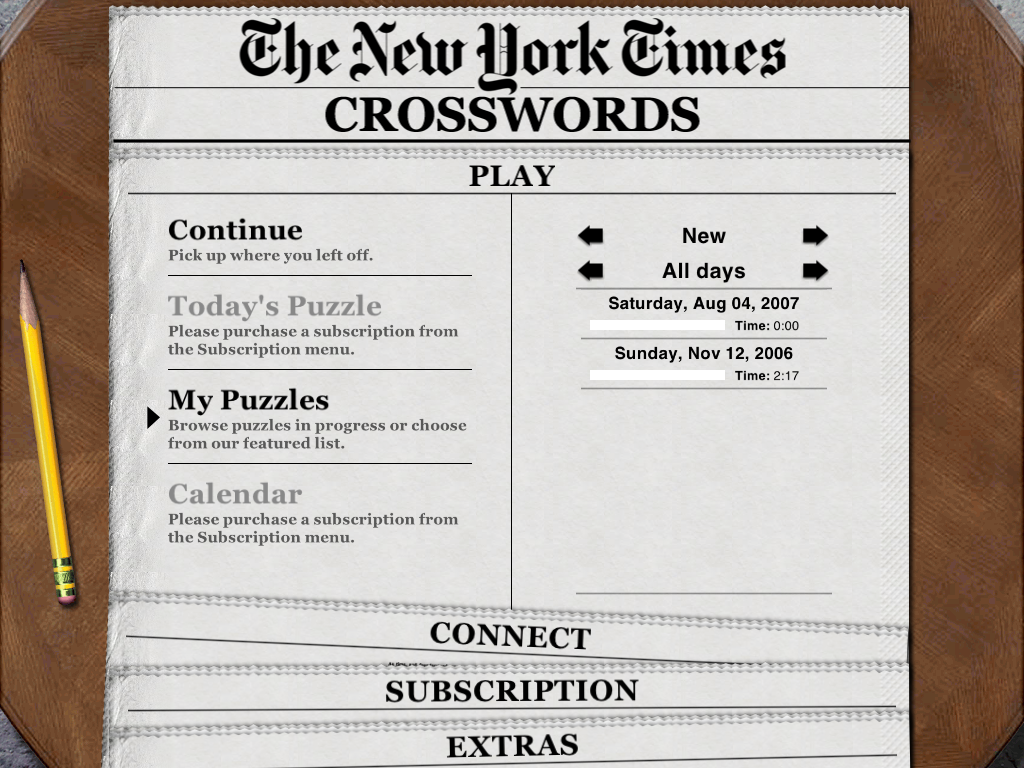 The game couldn’t be simpler, and it certainly makes doing those crosswords a lot simpler. You use the touch keyboard to enter your letters and words, and the specific clue you’re working on highlights — both the written clue, and the boxes in which you’re supposed to type the word(s) — while you’re doing them. I like that you can zoom in or out with the pinch gesture, though this feature can be a bit hyper-sensitive.

You can circle any box you want, so you can remember to come back to it later. You can even enter your letters in pencil. But since the game allows you to check your entries to see if they’re correct, I often find myself repeatedly checking each entry as I put it in, and sometimes even using the process of elimination to help me win. 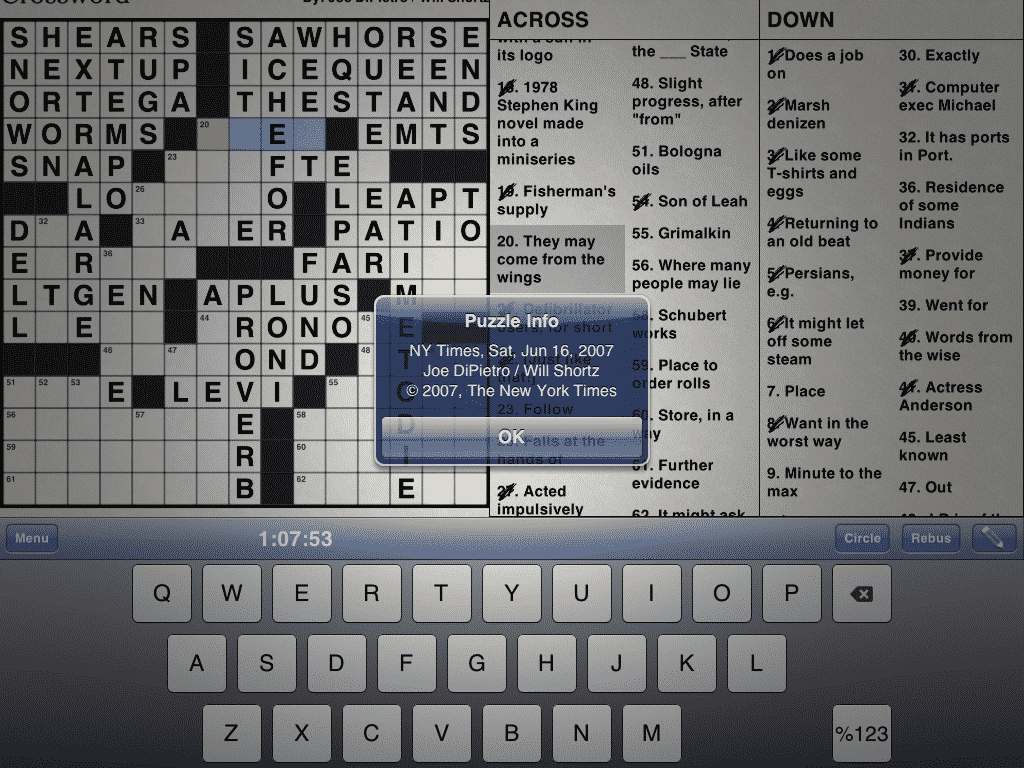 The only downside I can find to the app is that it veryÂ occasionallyÂ is known to spontaneously crash. But that’s a small qualm, since it’s true of nearly every iPad app available.

If you quit a puzzle in progress, the game saves it where you left off, and you can return to it at any time. Another nice touch is how the app sorts your library of puzzles: completed, in-progress, or crosswords you haven’t started yet. As for audio, you can choose a playlist from your iTunes library as background music.

The New York Times Crosswords also comes with some social networking and leaderboard features, allowing you to personalize your experience, connect to other players, and compare your scores against them as well as the all-time bests. 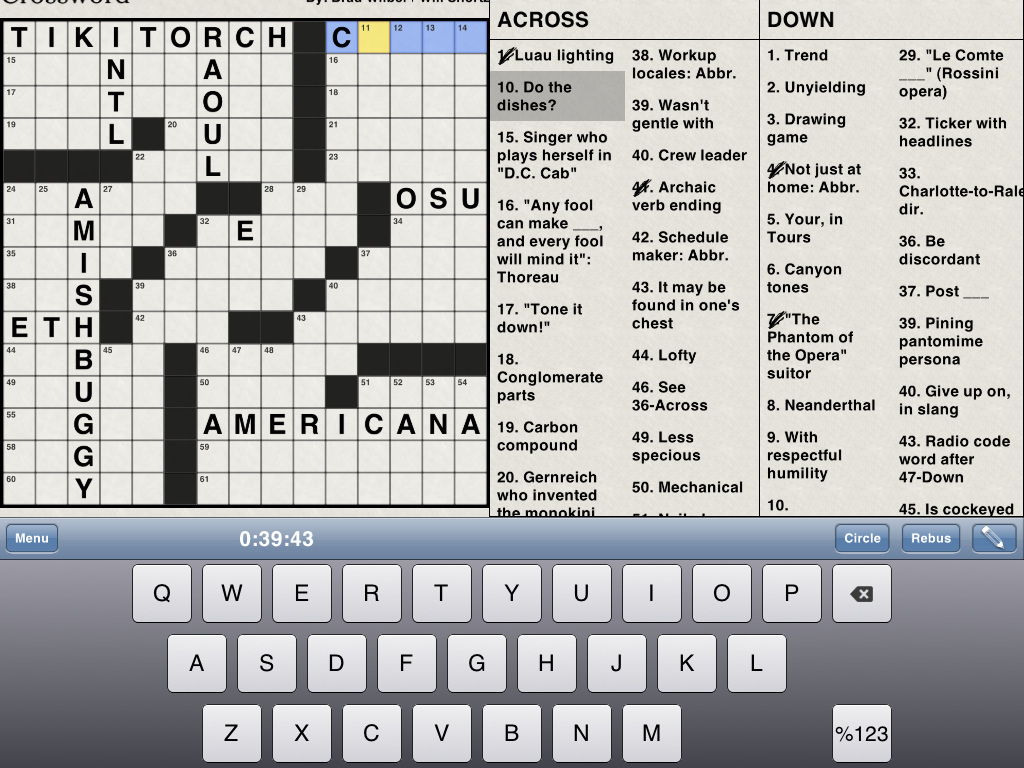 If you defeat the thirty included puzzles and want more, you can buy another thirty (aka, one month’s worth of daily crosswords) for $1.99, six months for $9.99, or a full year’s worth for $16.99. And you’re not obligated to play the puzzles in the allotted amount of time you purchase. For example, if I buy a one-month subscription, I receive all of the daily crosswords from that month as they’re published, but those puzzles stay in my library forever; I don’t have to solve them before my subscription runs out.

One last thing to consider is the fact thatÂ USA Today just recently launched its own crossword puzzle feature as part of its free app, allowing you to play each day’s puzzle from that newspaper for free. And if you’re only in it for the fun of playing and don’t need all of the other bells and whistles, USA Today‘s crosswords function nearly identically to those in the Times app. It’s an endless source of new puzzles, and it never costs you a thing (though it only archives the last two weeks’ worth of puzzles).

But then again, there are no crossword puzzles like the New York Times‘. And this robust, fully-featured app brings everything you could want to such a game with a bare minimum of fuss and muss. Devotees to the Times will devour it.