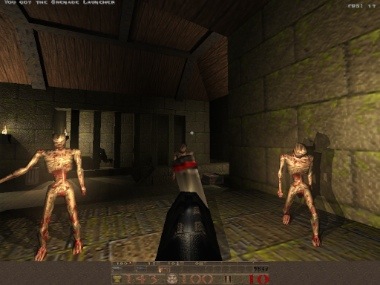 Wolfenstein 3D for iPhone put me in the mood for some classic FPS gaming – and, for me, it doesn’t get any better than Quake.

For those of you that may not be familiar with it, Quake was the 3rd FPS franchise created by ID Software. First there was Wolfenstein 3D, then the DOOM series, but when Quake hit, it was everything I ever wanted in a FPS game.

It was a huge hit at our high school too – so much so that we spent hours and hours of class time playing multiplayer in the computer lab. Sometimes as much as 3 hours a day (and yes, I do realize that classes were 1 hour each…we did A LOT of Quake playing).

So, I decided to do a quick Google search and find Quake for Mac. It was easy enough. You can get the shareware version of the original Quake right here.

I installed it, and ran the game at 1920×1200 – and it looks beautiful. The game is still awesome, and well worth pulling out of the moth balls.

There’s even a link to an active shareware multiplayer server…anyone up for a game?