UPDATED: PayPal may ban Safari if security isn’t beefed up 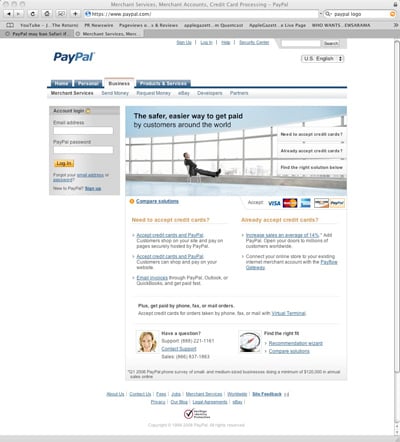 PayPal is reportedly stepping up security measures to prevent phishing scams, and that new security may just kick Safari users to the curb. Chief Information Security Officer, Michael Barrett, posted a new policy last week that outlined his plans to put an end to phishing scams which includes blocking fraudulent e-mails, criminal charges against phishers, and blocking access to browsers that don’t have anti-phishing security built in.

This would mean that the current version of Safari would be unable to access PayPal.

“In our view, letting users view the PayPal site on one of these browsers is equal to a car manufacturer allowing drivers to buy one of their vehicles without seatbelts,” he said.

Before they move to full fledged blocking, the company plans to issue warnings against using any browser that doesn’t provide adequate security.

If Apple doesn’t add some additional security precautions like those found in Firefox, and Internet Explorer soon, it may be left out in the cold…at least when visiting PayPal.

UPDATE: PayPal has issued a statement stating that they will not be blocking Safari, and that the company’s goals have been misread according to Michael Oldenburg, a PayPal spokesperson. “PayPal is developing features to block customers from logging into PayPal when using obsolete browsers on outdated or unsupported operating systems,” he explains. There is “no intention” of blocking any modern browser, including Safari. Rather, people would for instance be prevented from using Internet Explorer 4 combined with Windows 98.