Own the Seed That Apple Grew From 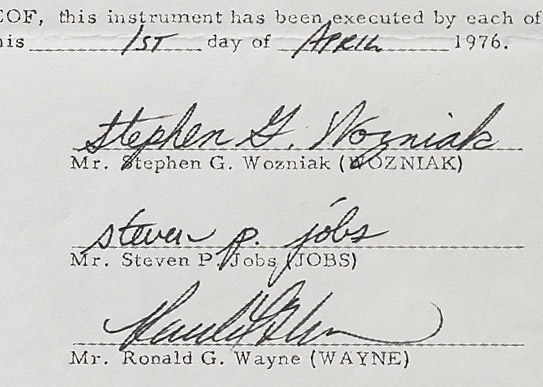 Got a few hundred thousand dollars lying around? Then there’s a good chance you might be able to buy the original legal documents upon which Apple was founded when they go up for auction in a few weeks.

With the signatures of Steve Jobs, Steve Wozniak, and Ron Wayne, the first document is the partnership agreement upon which Apple was founded. Jobs and Woz each claimed 45% of the company, while Wayne got 10% (his role was much smaller within the company, and didn’t last long).

Also included in the auction collection is a “founding agreement,” in which Jobs and Woz formally outlined their plans for world domination. This was where they put pen to paper to say exactly how they intended to run their company, and what kinds of computer products they would make. The third and final document is a “dissolution of contract” for Wayne, where he got out of the original partnership agreement with a payment of just $800. (CNN notes that had he stuck around, today Wayne’s stock options would be worth more than $30 billion.)

The Apple documents are considered to have a significant historic value, and are expected to sell for upwards of $150,000 when they are auctioned by Sotheby’s on December 13th.