OWC SSD Touted as Cheapest SSD Out There 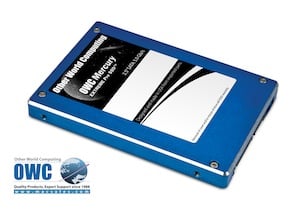 The world of Mac solid state drives (SSD) is a bit controversial. I don’t have all the answers on this one, but what it comes down to is TRIM. From Anandtech:

We run into these problems primarily because the drive doesnâ€™t know when a file is deleted, only when one is overwritten. Thus we lose performance when we go to write a new file at the expense of maintaining lightning quick deletion speeds. The latter doesnâ€™t really matter though, now does it?

Thereâ€™s a command you may have heard of called TRIM. The command would require proper OS and drive support, but with it you could effectively let the OS tell the SSD to wipe invalid pages before they are overwritten.

First, a TRIM-supporting OS (e.g. Windows 7 will support TRIM at some point) queries the hard drive for its rotational speed. If the drive responds by saying 0, the OS knows itâ€™s a SSD and turns off features like defrag. It also enables the use of the TRIM command.

When you delete a file, the OS sends a trim command for the LBAs covered by the file to the SSD controller. The controller will then copy the block to cache, wipe the deleted pages, and write the new block with freshly cleaned pages to the drive.

Now apparently, Windows 7 has this built into the OS. OSX doesn’t. As a result, some people notice a drop in efficiency over time, particularly in writing speeds. That means that eventually, that fancy SSD in your MacBook Pro is going to slow down to the point that it’s not as functional as it was to begin with.

Well, that may have changed with OWC’s SSDs, at least according to their reports:

If this is really the case – and I hope it is – then installing an OWC SSD in your Mac would kiss some serious butt. Better yet, the 40GB model is just $99. It’s an upgrade I’ve been debating for a while, and maybe now I’ll pull the trigger.