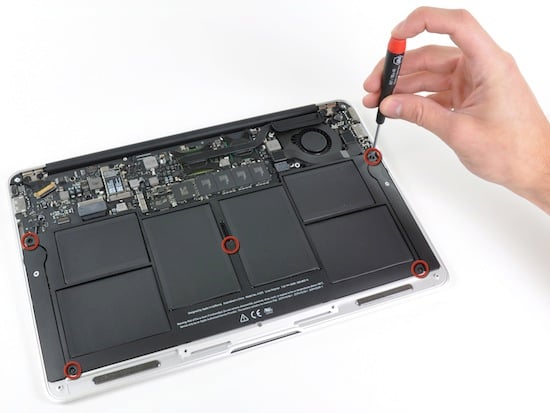 I’m a car guy, and I love putting things together and taking them apart. That’s why I love the crew at iFixit. Every time a new Mac model comes out, they splay it out on the table and do an autopsy so that we all can see the goodies inside. In the case of the new 11-inch MacBook Air, there’s not a ton of surprises – mostly because it was all displayed during Steve’s keynote.

Well, maybe a few things. For one, the MBA comes with a USB key instead of a CD for the software reinstallation disk. That’s pretty cool, and probably the wave of the future. Then there’s the power button, which is now a part of the keyboard instead of an individual button (it replaces the eject key). The power adapter is also smaller than the older model as well. Oh, and the lower case is held in place by 5-point Security Torx, meaning that taking it apart isn’t an easy task.

I was at the Apple store yesterday to pick up iLife ’11 for the wife, and they didn’t yet have the Air on display. I’m anxious to see it in person, and so is one of my bosses. Turns out he’s pretty sold on the 13-inch model, and may be picking one up soon.