Engadget also suggested said that the next-genÂ Apple TV will essentially be an iPad without a screen, using the sameÂ hardware, including the CPU, OS, and 16-Gbytes of flash memory. To accommodate the smaller storage, Apple will emphasize streaming content, the report said. 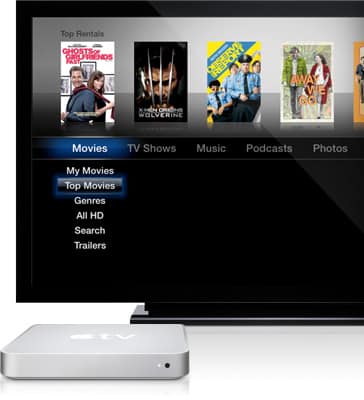 For a project that’s known as Apple’s “hobby,” the AppleTV sure has gotten a lot of press over the past few weeks. First, we’ve got Steve Jobs at D8:

Q: Hi, Iâ€™m from Hillcrest Labsâ€¦ do you think itâ€™s time to throw out the interface for TV? When will Apple do something there?

A: The problem with innovation in the TV industry is the go to market strategy. The TV industry has a subsidized model that gives everyone a set top box for free. So no one wants to buy a box. Ask TiVo, ask Roku, ask usâ€¦ ask Google in a few months. So all you can do is ADD a box to the TV. You just end up with a table full of remotes, a cluster of boxesâ€¦ and thatâ€™s what we have today. The only way thatâ€™s going to change is if you tear up the set top box, give it a new UI, and get it in front of consumers in a way theyâ€™re going to want it. The TV is going to lose in our eyes until there is a better go to market strategyâ€¦ otherwise youâ€™re just making another TiVo.

Then there’s the rumor that keeps popping up about the AppleTV running the iPhone OS, such as this report from PCMag:

A report released Friday suggests that Apple will release its next-generation Apple TV at just $99, tapping into cloud storage and its iPad processor at the same time.

Engadget cited a source in reporting that the next Apple TV, previously described as a “hobby” by Apple, will be priced at the more mainstream price of $99. Apple currently sells its Apple TV with a 160-Gbyte hard drive for $189.

Engadget also suggested said that the next-gen Apple TV will essentially be an iPad without a screen, using the same hardware, including the CPU, OS, and 16-Gbytes of flash memory. To accommodate the smaller storage, Apple will emphasize streaming content, the report said.

I’m going to stick with my guns on this one. Apple has over $40 billion in cash right now, so they can pretty much develop anything they want. I truly believe that if there is going to be a new AppleTV, then it’s going to be a full-blown television set. Now there’s a possibility that it could run the iPhone OS, but it would have to be adapted to work with a remote, obviously. Is that likely? Well, the iPhone OS is pretty lightweight compared to OS X, and it would fit in well with the current system. I think it’s a distinct possibility.

But here’s the $40 billion question: Would it sell?

Most things that Apple put out on the market get scooped off shelves quickly, but the television market is pretty well covered. Plus, it’s not cheap to buy a new 47-inch flat screen, and with Apple’s pricing strategy, there’s a good chance it wouldn’t be a bargain basement deal competing against $900 Visio plasmas. I think that if the product is right and they get onboard with a few cable outlets, there’s a definite chance for success. That said, if Apple has learned anything from its partnership with AT&T, it probably doesn’t want to have to get in bed with anybody if it doesn’t have to.