by Michael 15 years ago5 months ago
3 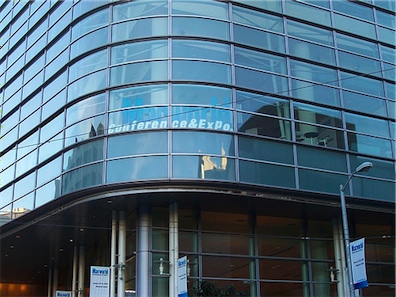 Sitting in the hotel room tonight I can finally sit back and reflect on the first day of the Macworld Expo. Today was a day of a lot of new experiences for me, and it was very, very interesting.

I should say that I’m here as a member of the media. Apple Gazette qualified for press access this year, which was very validating. I realize that the qualifications are not as strict as they once were, but to be sitting in the same media lounge as the guys from Variety and MTV is very rewarding. It ads credibility to what we’re doing here, I think, and it gave me access to some very interesting stuff.

On the expo floor I met a lot of great companies today. Everyone of the companies being distributed by Dr. Bott were friendly, and they seem to be making some tremendous products. The self-guided tour ended with a nice schwag bag that may end up as some prizes here on the site in the near future.

Other companies like Xtreme Mac, Axiotron, and several others were all helpful, informative, and interested in helping us make Apple Gazette your source for quality 3rd party product reviews. That’s something I sincerely hope we can do more of in 2008, and if these companies are half as supportive as they claim they will be, we should be in good shape.

I also set in on a press conference or two. The most notable was the VestaLife press conference. The room was literally packed full, and VestaLife made a great first showing at Macworld. The company itself is less than a year old, and their first product, called the ladybug, is really something special. It’s a very high quality iPod dock/speaker/hub that comes in some amazing designs, and has a very interesting feel to it. I’ll be reviewing it here very soon.

After the hall closed for the day, I managed to score myself an invite to a gathering at the John Lennon bus, which featured Richard Dreyfus (you know, from Jaws, Close Encounters of the Third Kind, and…you know…”Here’s to the crazy ones…”). The event was promoting the bus and the great work that they do with it. The bus travels all over the country giving kids a chance to create music, shoot a video, and ultimately take their work home on a DVD all in one day. It’s a fantastic learning and creative experience that I think is really wonderful.

I managed to find myself standing next to Mr. Dreyfus for about 30 minutes or so, and was really fascinated by the group discussion that was going on in this circle I sort of wandered into.

As I left that event, I accidentally ran into (almost literally) Sinbad ( you know, stand up comic Sinbad – not the sailor).

It was very odd running into these celebrities. What was even more odd was that shortly there after I saw Robert Scoble and Cali Lewis at the Apple Universe 100th episode live show – and I would have probably been more nervous talking to them than to either Richard Dreyfus or Sinbad.

As I sit here now, unable to sleep (probably because of my caffeine intake) I can’t help but be taken aback by the fact that a year and a half ago I had never blogged before. I started blogging one weekend on a whim…and it’s completely changed my life.

I’m very thankful to the Bloggy Network for believing in my enough to give me Apple Gazette in the first place. Tomorrow will be another full day, and I’m really looking forward to seeing the rest of the show, and talking to more great companies and people. I’m sure its going to be a blast.