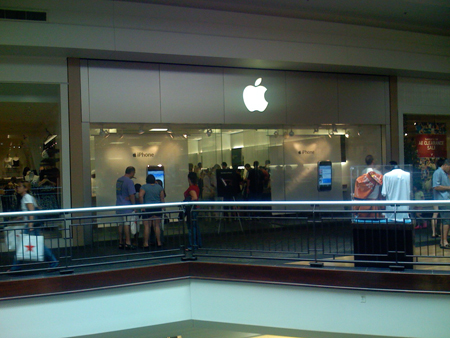 Austin is a very interesting city. It’s the kind of place with great art festivals, countless high end shops and restaurants, and deadlocked traffic at 3:00 pm on a Thursday afternoon.

We left for Austin about 1:30pm and did not make it to the Barton Creek Mall Apple Store until 5:00 pm. The trip was supposed to take 1:48 minutes. We spend well over an hour in traffic just creeping along the road.

When we finally did get to the store, apparently they were running late too, because I was still on the list of upcoming customers. I met with an Apple Genius, who was baffled by the audio problem with my Macbook Pro. Two or Three of them each tried to guess what it might be. They even had me record audio in the store until I could recreate the problem.

After they were satisfied that I wasn’t making it up, they decided to try and replace the left I/O board. Nobody was sure if that would do it, but it’s the next thing on the list of parts to replace.

After we were finished at the Apple Store we stayed around the mall for a bit, and about 30 minutes later I got a call from Apple. Mark, the guy who’s been helping me since the beginning of this process assured me that “one way or another, we’ll make this right.”

I should have the Macbook Pro back early next week. Hopefully replacing this board will fix the problem, but I have to say, it’s hard to have confidence in this Macbook Pro. So far Apple has confirmed the “3rd Party Memory” was malfunctioning on it, AND the logic board was malfunctioning on it – that’s 2 of the most important parts of the computer that were bad. If the I/O board is bad too…then what on the darn thing isn’t?