iWork on the iPhone? I Hope So. 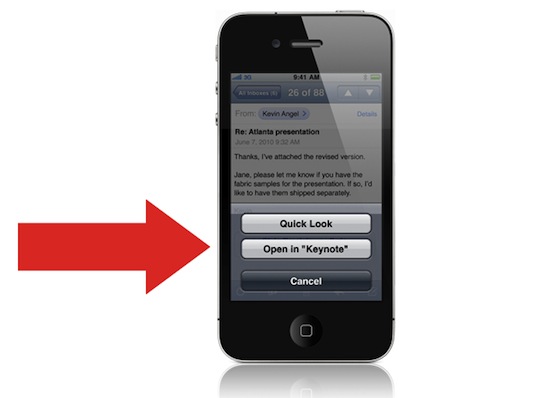 Take this one with a huge grain of salt, but Pocket Lint is reporting that on the US version of the Apple site that this image was posted showing very clearly that Keynote is on the iPhone. Apparently since Pocket Lint found the problem, Apple has gone ahead and deleted the image, but in a world of “screenshot or it didn’t happen,” Pocket Lint has it covered. From their post:

Apple has inadvertently posted a screen shot on the new iPhone 4 pages of its American website showing the option to open an attachment “in Keynote”.

Could Apple have made a faux pas, detailing too much in its excitement to spread the word about the new iPhone 4? Or is it merely a mistake on the company’s behalf.

I think with iMovie and iBooks coming soon to the iPhone that iWork is just a bit of programming away, if it’s not in the works already. I know plenty of people who would use iWork on their iPhone – myself included – as it’s an easy way to get things done in short order, and you could make changes to documents on the fly. And at $9.99 an app for the iPad, it’s a touch expensive. But I see it being priced around $5.99 – $7.99 for the iPhone.