It’s another one of those “let’s compare iOS users and Android users”, but this time, the comparison zones in on travel preferences. In a study conducted by Battery Ventures, an investment group, it was revealed that iOS users prefer to take planes, while Android users take the bus. 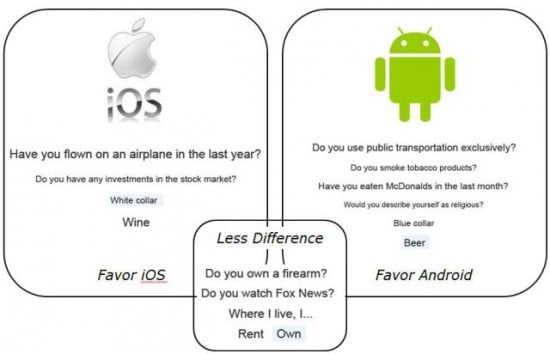 Obviously, what some are taking away from this is that iOS users are more affluent. Remember that bar graph showing that Apple is for the rich?

Before you get all huffy about this generalization, though, it is worth noting that Jonathan Sills, the Battery Ventures entrepreneur-in-residence who conducted the firm’s study, says that there are some commonalities that don’t necessarily point to the conclusion that Apple is for the rich. For example, Android and iPhone users are equally likely to be homeowners or to own a gun. (I’m an iPhone user, and I’m not a homeowner. And, no, I’m definitely not rich.)

Other information gathered from the study include:

The bottom line? The study is not meant to denigrate anyone, but to point out that understanding your demographics as a business is important.

So, iPhone users, does the data apply to you?