by Noemi 9 years ago8 months ago
3

And, the conspiracy theorists are having a heyday!

Right before the weekend, we read about a stupid coding mistake in iOS, leading to Apple developers working frantically to fix it AND release the fix. Various sites have released the lines of code which lead to a serious security issue, with everyone saying that if you know how to read code, the mistake is very easy to spot. 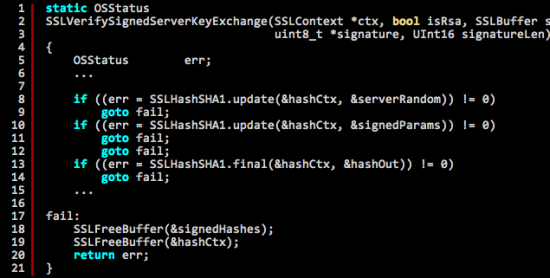 Now, anyone can make a mistake – even something as crucial as the gotofail bug, which essentially “causes most iOS and Mac applications to skip a crucial verification check that’s supposed to happen when many transport layer security (TLS) and secure sockets layer (SSL) connections are being negotiated,” rendering this security layer totally useless.

To be fair to Apple, they very quickly responded and we’ve all probably downloaded and updated iOS at this point.

Here’s where the conspiracy theorists come in.

Was the bug a real bug or was NSA (or some snoopy agency) behind it? The LA Times was quick to raise this question, but to be fair, they also shared the opinions of people qualified to make a comment on the problem, Google’s security expert Adam Langley being one of them:

“This sort of subtle bug deep in the code is a nightmare. I believe that it’s just a mistake, and I feel very bad for whomever might have slipped in an editor and created it.”

Probably not as bad as the people responsible for the mistake!

Then there’s “others”, as the LA Times published, who drop names like Snowden and the NSA, and how some researchers have discovered that the bug first appeared in a version of iOS 6.

So what do you think? Does the NSA have something to do with this, or is there a poor developer beating himself up over the mistake (not to mention the facing probability of getting fired)?