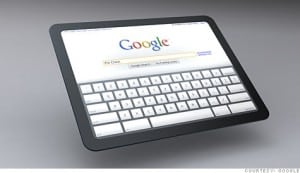 I’m a fan of Google. I use Gmail all the time, Google Maps is my co-pilot, and I use Google Reader and Alerts to get info for this very website. What I don’t like however, are Google’s other software, Chrome and Android. I can’t get used to Chrome, and Android just does nothing for me. It’s like dating a really hot chick who can only talk about potato pancakes. Sure, she’s fun to take around and show off to your friends, but you end up wanting to smother yourself with a pillow every time she opens her mouth.

But enough about my ex.

Thank you, I’ll be here all week. Tip your waitress.

CNNMoney is reporting that Google is working on a tablet of their own, which would run on the Chrome OS. From the article:

When Google first announced that it was building an operating system, the company said it was focusing on the netbook market. Though Chrome OS’ developers said they are still primarily focused on netbooks, the operating system “could eventually scale to a wide variety of devices,” including an iPad-like tablet computer.

“Google Chrome OS is still in development and we are constantly experimenting with various user interfaces to determine what designs would produce the best user experience,” said a Google spokesman.

A lot of people criticize Apple for having such harsh controls over their hardware and not allowing anyone to install their OS onto just any old computer, but this is one of those instances where it makes sense. Ever play with an HTC-build Google G1? Maybe you have a Droid and you love that battery cover that just falls off whenever you pull the phone out of your pocket? Apple controls the hardware so they get quality control in the mix as well. Google, not so much. This tablet may have the best OS in the world and dominate over the iPad, but if it falls apart in your hands, what’s the point?

This thing might be coming out later this year, but who really knows. Until it does, I’ll reserve judgment.