How to Get a Flappy Bird Knockoff Approved: Name it...

This week, we heard about Apple (and Google) bringing the hammer down on developers who submitted Flappy Bird knockoffs to the App Store. A sure sign seemed to be the use of the word “Flappy” (I wonder why), although there might have been other considerations. 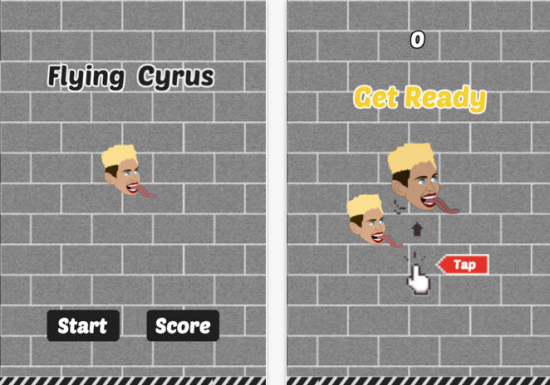 Understandably, developers were frustrated and took to the Internet to express themselves. Here’s one developer who might have hit a goldmine with a Flappy Bird knockoff – which passed Apple’s stringent regulations!

Called Flying Cyrus, the game is already dominating the free app chart. With 644,000 downloads in 24 hours, Talo (the developers) certainly have a hit on their hands.

Aside from the concept, what makes Flying Cyrus so appealing?

Take a hint, folks: this game will hit you like a wrecking ball.

(Don’t worry, I am groaning as I wrote that…can’t believe I actually am publishing this with that line!)

I suppose that pretty much everyone has accepted the fact that Flappy Bird is no more, but hey, there’s Flying Cyrus, and you can either hate on Mister Achy Breaky Heart’s daughter or play with her for free. From what I hear of the difficulty of the game, you’ll still probably end up frustrated either way.

Download Flying Cyrus if you’re a sucker for punishment, or if you simply want to experience something Flappy Bird-like.