Over the years, the first trillion-dollar company in the world has been at the forefront of manufacturing technology.  Apple produces billions of dollars of consumer electronics each year.  It has tried severally to create a machine revolution in order to replace human labor on its assembly line.  However, it has learnt that the robot revolution is not the way to go because there are things that robots can’t do.

In some of its factories in China, Apple tried to automate the entire process of making Macs, iPhone, and iPhones.  In fact, Foxconn had an experimental, fully automated manufacturing line specifically for iPads.  Robotic arms, Foxbots partially assembled iPad parts as they moved along the conveyor belts, where they were cut, treated with chemicals, and polished.

As a result, the experimental line showed that very few humans were needed.  But, Apple is obsessed with details in its processes to make products.  It doesn’t compromise on its products’ features, so Apple wasn’t ready to accept a production line that didn’t meet its standards to create quality products.  Its engineers have been experimenting with a huge range of methods for testing and assembling products using robotic systems.

The following are hard lessons that Apple has learned about assembling its products using robots. 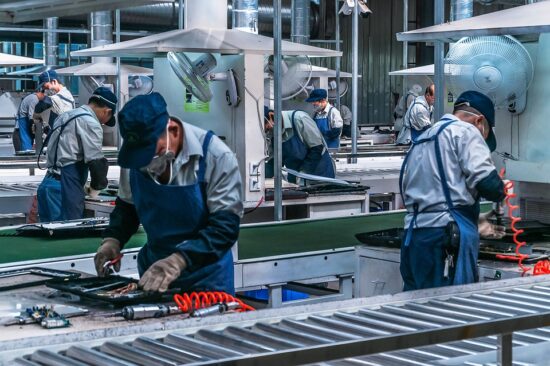 Based on Foxconn’s experimental projects where Apple is its biggest customer, there was the risk of things falling apart during production.  This is particularly so during the production of iPhone and AirPods, which have a high consumer demand thus little time to produce them.

Therefore, the company can’t withstand production delays caused by automated systems.  So it’s much easier to deal with training issues and human labor problems than robotics and automation issues.

To avoid the repercussions of automation, Apple closed its Secret Robot Lab located in Sunnyvale, California, in 2018.  When the company opened this lab in 2012, a dedicated team of engineers began the process of finding ways to automate all production lines, thus cutting back on workers on its supply chain.  Actually, every new iPhone release required nearly 1.7 million workers; therefore, the company set the goal to reduce that figure.  Further, Foxconn was under a lot of pressure because finding enough Chinese employees for its factories was a big challenge, yet the demand for Apple products was multiplying.

Industrial robots from Mitsubishi, Denso, and other vendors tried to fine-tune processes like dabbing glue onto the products’ display panels and fastening in tiny screws.  Further, smart conveyor belts as well as elevators to move products along different assembly stages were installed.  Specialized software and Industrial cameras were fixed to keep all working robots in sync.

However, the robotics technology was not up to the desired precision that Apple’s engineers were looking for.  One challenge that the engineers identified was that the screws used in iPhone were extremely tiny to the extent that robots could not measure the required force to drill them in.  However, its employees were able to feel the resistance on their hands.

Additionally, the robotics engineers considered the automated systems a bit risky for the company’s flagship products, such as iPhone.  A lot of problems arose from Apple’s attempt to automate its production.  For instance, precision is needed when applying glue to its products, and a machine can’t reliably match humans.  A machine can’t correctly pick and position tiny screws the same way an employee’s hand can do.  Because of that, Apple abandoned the lab in 2018, and other parts of the company picked and continued some of its work.  It also relegated automation to other products like Apple TV or testing instead of assembling and polishing Apple’s products like the 2013 Mac Pro but not Apple Watch.  Today, all first-generation Apple Watches are polished by hand but not robots.

Based on this discovery, robotics techniques are only applicable to specific products, which is less cost-effective because it’s easier to train human workers to perform different tasks than establishing an entire robotic assembly line for individual Apple products.

Automation Delayed the Production of Its Products

Apple invested in the automation of the production of the MacBook in its factory in China.  The purpose was to use robots in assembling the keyboard, screen, and trackpad into the casing of the MacBook.  The robotics team hoped that the new line could break even and give better results as well as use fewer workers.

However, the reality was different from what was expected.  First, the conveyor belt installed to move parts along the production line was erratic, sometimes slow, causing traffic jams along the line and malfunctioning robots, which required continuous human intervention nearly the entire year.  These interventions include reworking the process because the automation couldn’t detect the breakdown and repair it.  In fact, the robotics team discovered that automation couldn’t replace the error correction and problem-solving skills that human beings have over machines.

The persistent failures delayed the launch of the 12-inch MacBook by six months.  In other words, the delay cost Apple far more money than it hoped to save.  Worse still, this product was not a huge success as anticipated, so it had to discontinue its production.  Apple may also not be ready to spend more money retooling this production line for its other models.

Apple has learned that flexibility is key.  Humans are better than machines because they’re flexible and can be reassigned more quickly than robots.  In fact, retraining a person is less costly than redesigning a robot.  It’s also easy to switch production to its other companies when a problem arises or when there is a higher demand in one production line.  That means it has alternative sources to leverage which it can’t do with annually-updated automation production lines.

Apple requires a high level of flexibility in how it releases its products.  Many Chinese seasonal workers are recruited when there is a new iPhone release.  However, the workforce is reduced once the demand subsides.  On the other hand, an automated assembly line must be designed in a manner that it can handle peak capacity while remaining nearly idle the rest of the year.

The disadvantage of designing single-purpose robots is that they will sit idle while if it was human workers, they could be reassigned to the next project or another one with demand shifts.  In fact, a team that was assembling iPhones in October could end up in a MacBook Pro production line in February, and the cycle continues.

This is what Apple does with its suppliers.  The use of multiple suppliers helps the company enjoy the flexibility of shifting orders among competing suppliers in order to get high-quality raw materials at the best price.

Further, all equipment requires retooling because even the same product, for example, iPhone, needs immense internal changes whenever there is a new release.  That means each new iPhone model undergoes some internal changes than the previous one, thus the need to alter the automation equipment whenever there is a new series.  That means it’s hard for Apple to justify the need for considerable investments in automation equipment.

Does Apple Use Robotic Automation in Its Production?

Yes.  Apple uses some robotic automation to manufacture its products but in a limited way.  However, these applications are used in particular situations, especially where robots are already excelling.  Daisy is the company’s high-profile robot that disassembles and recycles nearly 200 iPhones an hour.  However, this capability is possible because it’s easy to dismantle than assemble a device from scratch.

Robots are also used in macro production process aspects such as assembling aluminum casings, cutting down metal pieces, anodizing components, polishing, and other activities that are hazardous to human workers.

Human workers are an important element during the production of any Apple product.  They put together all the parts in order to create a new product.  Therefore any future robot revolution is not coming from Apple.