You are here: Home / Apps / Attack of the Social Video Apps! 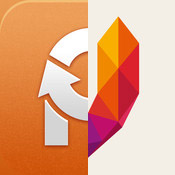 This week in the iTunes App Store, a pair of iPhone apps have launched that look set to kick-start a new revolution in social video. One of these might just become the video version of Instagram.

Two apps. Both free. Both hoping to do for video sharing what Instagram did for photo sharing. I draw no verdicts here, only provide the details so you can decide which one is right for you. But then, why not try both? You’ll find each provides a distinctive experience. Vyclone was the first out of the gate, and it’s perhaps the more focused of the two. What it does that’s unique is sync up multiple video recordings of the same event. Say you and a few friends went to a concert, and all of you filmed this one song that you really love. With Vyclone, you gain instant access to each other’s recordings, and you can edit, mix-and-match, and produce a polished video showing off multiple angles, in minutes. Vyclone auto-syncs these multiple videos for you, regardless of whether you and your friends hit the “record” button at the same time. Up to four separate camera feeds are supported for a single event sync, so you can mix those videos to create your ultimate edit. Vyclone comes with its own social community, like Instagram, as well as working with Facebook and Twitter, but you have the option of sharing vids with only those friends or family members you wish. Several visual filters are built in, and the video editing tools are as simple as can be. The results of videos mixed and edited with Vyclone are said to be quite impressive. Ptch, which just appeared on the App Store today, was dreamed up by Ed Leonard, formerly of DreamWorks, who envisioned a way of letting friends grab, remix, and repost their friends’ (or their own) videos. With a single button tap, you can snatch other people’s videos and images and embed them into your own videos. It even plays nice with other video apps like Viddy. (You can also import media from Facebook, Twitter, Google+, Instagram, and Tumblr.) The interface is clean and simple: a carousel of photos and videos you have access to (either from your camera roll or those other social outlets) gives you quick, easy access to all sorts of content you can use. Add clips, pictures, music, captions, titles, and themes. Its best feature is its speed of use. Where other video apps require time to process your changes, Ptch‘s videos are rendered and streamed back to you instantly. As in, impossibly fast. Try it and you’ll see. Sharing your video online is just as easy, but be warned that Ptch limits its video lengths to just 60 seconds.

If you try both apps, I’d love to hear what you think.