Adware Comes to the Mac Courtesy of Java Installer

One of the main reasons so many of us love our Macs so much is because they allow us to safely and securely surf the web without fear of picking up a virus, or some other type of malware, along the way. In fact, OS X is so safe and secure that there have been very few viruses or spyware that have ever appeared in the wild at all. But now Mac users who wish to keep their computers free from these kinds of annoying attacks have a new cause for concern, and it comes from a very unexpected place – the latest Java installer from Oracle.

In the latest release of Java for the Mac, Oracle has made the bold choice to start including adware from Ask.com with the default installation. This software, which has plagued Windows users for years, will install the Ask Search Toolbar to your default browser, and changes your default homepage to Ask.com, all without even asking for your permission first.

According to a report from ZDNet the Java installer will add  a special Ask extension to both Safari and Chrome. After a restart, the new search bar will appear in both of those two browsers, as will the Ask.com start page. While the site is a mostly harmless – and very mediocre – search engine, it does tend to return results that are heavily laced with advertisements that are often difficult to distinguish from actual search results. This can be confusing for some users who are accustomed to the far cleaner search results found on a site like Google for instance.

While the Java installer will add the adware without specifically asking for permission, sharp-eyed Mac users can prevent it from being installed none the less. During the Java update process there is a check-box that asks whether or not the user wants to install the Ask software. Unchecking the box will keep it off of your computer altogether. 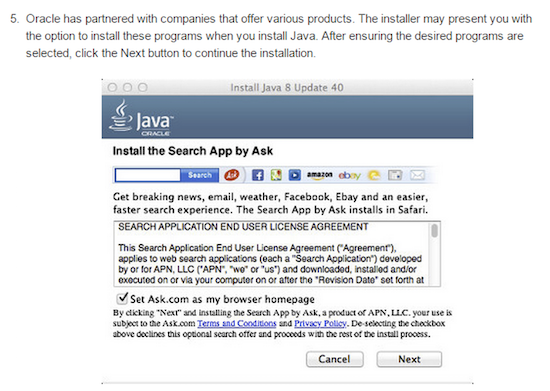 If for some reason you accidentally click through the installer without unchecking that box, the adware will find its way onto your Mac. While this is annoying to say the least, it is fortunately easy to remove. Safari users can simply go to their list of browser extensions (Safari Menu => Preferences => Extensions) to remove the offending software, while Chrome users can choose to uninstall it directly from the Ask toolbar’s Help menu. The default browser window will still open to Ask.com however, and must be manually changed to another site.

It is annoying that a major company like Oracle would stoop so low as to include an adware installation as part of an important piece of software such as a Java update. Obviously Ask.com pays Oracle a fee for including it as part of the installer, but considering that the company generated $2.5 billion in revenue last quarter alone, that fee has to be a fairly minuscule part of the overall bottomline. While Java continues to play an important role in cross-platform software development, it is disheartening to think that the company behind that software is willing to sell its users out for what has to amount to a trifling sum. If we had another source for Java, you can certainly bet that customers would be scrambling off to take advantage of it.

Consider this article a warning the next time you receive notification of a Java update. Keep your eyes peeled for that all important check-box and be sure to uncheck it before you complete the installation.