You are here: Home / News / 5 Things We Learned During Charlie Rose’s Interview with Tim Cook on “60 Minutes” 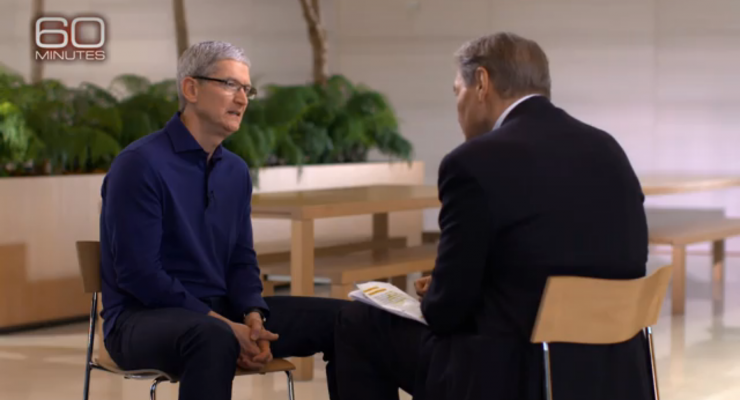 Apple is a notoriously secretive company, and with the massive successes that the company has created over the past decade or so, it’s easy to see why. It’s not an exaggeration to say that Apple creates the future of desktop (laptop computers included here) and mobile computing. While other technology companies may occasionally be truly innovative, Apple has done it consistently, making it easy for other companies to ride on the brand’s coattails. (Don’t believe me? Just check out the design of the smartphone since the iPhone was introduced.)

Over the weekend, Apple pulled back the curtain a bit and let CBS’s Charlie Rose in to interview Chief Execute Officer Tim Cook, Chief Design Officer Jony Ive and other members of the Apple team on “60 Minutes” Sunday night. Rose’s interview touched on many of the big questions surrounding Apple, including corporate taxes, working conditions in China and the company’s stance on its users’ privacy and encryption technologies.

While much of what Rose uncovered would seem pretty obvious to people who follow Apple closely, there were a few surprises. For a company that is, as Cook puts it, more secretive than the CSI, this is a relatively revealing story. Here are five of our favorites moments.

5. There wereÂ ten different sized models of the iPhone 6 and iPhone 6+

It’s not a surprise that Apple would make prototypes of its devices — it would be more than surprising if they didn’t, right? Everyone assumes that there would have been prototypes of the iPhone 6 and iPhone 6+ before they were manufactured, but Â but makingÂ ten different sized models of the iPhone 6 and iPhone 6+ just seems like overkill, but to Jony Ive, Apple’s Chief Design Officer, it was essential.

In Ive’s interview with Rose, he explains that the design team at Apple needed to physically build these models to understand which two would work best, butÂ bestÂ wasn’t all about functionality, exactly. Instead, Ive explains that the models chosen to be the iPhone 6 and iPhone 6+ “emotionally felt like a good size.” When Rose pushes Ive about the emotional connection with his products, Ive admits that the iPhone 6 and iPhone 6+ is really just “the tip of the iceberg.”

4. Apple’s new headquarters is going to be awesome. Really awesome.

Rose’s interview gives us an close look at Apple’s new headquarters, and it really looks awesome. Dubbed the Spaceship by many, Apple’s new corporate headquarters is starting to take shape. Cook estimates that the new headquarters is around a $5 billion project. The grounds will grow some of its own food to be served in the cafeteria, and a natural ventilation system will allow the headquarters to go without using air conditioning or heating for nine months of the year! Solar panels will line the top of the building, allowing it to function without being plugged into the grid.

3. AppleÂ intends for its products to cannibalize one another.

During Rose’s interview with Apple’s staff, he spoke to Phil Schiller, Apple’s head of marketing, and asked him about certain Apple products cannibalizing others. While you might expect Schiller to respond with some argument about how important each product is and how each product has its own strengths, Schiller’s actual response may take you by surprise.

If Apple wants its products to compete against one another, it’s doing a great job of that. On the other hand, this quick little remark from Schiller is great off-the-cuff advertising from the company’s head of marketing.

2. Cook decided to come out after hearing from people contemplating suicide.

Cook is now the only openly gay leader of a Fortune 500 company. He came outÂ in 2014, but Rose pushed him on why he didn’t come out sooner and what finally made him come out publicly. Cook’s response was straightforward, saying that it became clear to him that if he came out publicly, “it could help other people.”

Cook goes on to explain that he’s gotten notes from people contemplating suicide. Cook describes coming out publicly as a moral responsibility, something that he had to do in order to look at himself in the mirror.

1. Cook still sees Apple as Steve Jobs’s company, even years after his death.

At some level, we all know that Apple is still Steve Jobs’s company. When such a charismatic individual leads a company like Apple, it’s virtually impossible to ever separate the two. Cook is a good steward of the Apple ship, and he’s a great leader in his own right, but it’s comforting to know that Jobs is still such a big part of the company that he built, left and then returned to before his death.

As Cook says in Rose’s interview, Jobs’s DNA will always be part of Apple.

Did you see Rose’s interview with Cook, Ive and the rest of Apple’s leadership? If not, you can catch the entire story on the “60 Minutes” website. What did you think of Rose’s interview? Let us know in the comments below.

How Apple Has Changed From Steve Jobs to Tim Cook