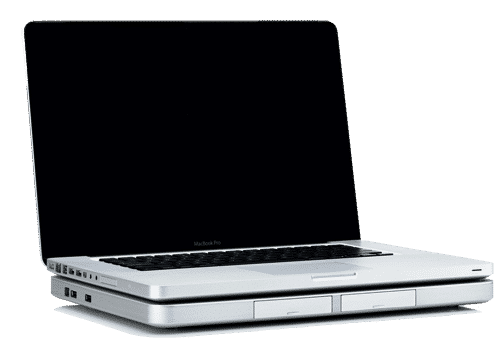 I’m a big fan of docks, stands, and in general, organization. I’ll spend a ton of money on getting everything in my workspace situation just right, then inevitably, something will change a few weeks later and I’ll tear it all apart again. One thing that I’ve always wanted for my Mac that my wife has for her Dell is a dock. Most PC docks look clunky and weird, and I always hoped for one that would be more Apple like, that would fit the theme of the device. Well, answering my hypothetical request is Zemno, with their DeskBook dock.

It hits many of the dock basics, with lots of additional ports, and even expandability. The ports also come out the rear of the device, which hides them in the process – a nice feature.Â Those two panels on the front of the DeskBook hold what they call ModBays, which can hold a hard drive, battery, or any number of other components that you can think of. Soon they’ll even have an internal iPod and iPhone charging dock for a bay.

But as neat as it is, it’s also pricey. Pre-orders list the thing at $599 for the DeskBook, then $179 for a 500GB drive and $149 for a battery. If you bought every accessory, you’d be at $927, which is just $72 under the price of a new MacBook and $272 under the price of a 13-inch MacBook Pro. It’s also … ugly. PC docks are nice because you can push your computer into it and the wedge design keeps the keyboard accessible if you prefer to use it. This lifts the MacBook up a bit, making it look ungainly. The DVI port on the back doesn’t do much good either, because it uses USB to carry the video signal. And the biggest problem to me anyways, are the ModBays. From what I can tell on the site, they stick out a good two inches from the face of the DeskBook. Even if you wanted to type on the keyboard, you’d have to avoid these mammoth boxes.

If you really want a dock, and you have money to burn, this might be a good option for you. In my situation, as much as I want a dock, I’d rather spend that money on another computer instead of a computer accessory.