Welcome to the eParty Borders, Have a Seat by Amazon... 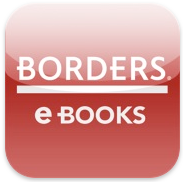 In my town, there used to be a Borders bookstore every few miles, until a few years ago, when they all started to disappear. I’m not hunting them down or anything, so it’s not like I know exactly where they are today, but the only one I’ve seen recently is downtown by my old work. Otherwise, I haven’t seen them around.

That makes me wonder how well Borders is doing, but not enough to actually research it in any way. What I do know is that they just released an e-reader app, in the same vein as the Kindle and Barnes & Noble apps, for both the iPhone and iPad [iTunes link]. So how is it?

I downloaded it for the iPad, and at first, I thought it might be kind of cool, but then I dug into it a bit. The page transitions is a bit odd, but that’s adjustable, so that should make it cool, right? Not really. The page curl takes the page and flips it up, like a reporter’s spiral bound notebook, which is odd when reading a novel. Then there’s the load times, which in some cases, takes forever. And there’s also the lack of a dictionary or other research options, found in most other e-readers. Frankly, the only real thing I liked about it was the bookmark, which looks like an actual bookmark.

There are many other choices for e-readers on the iPad and iPhone, and for me, Borders falls in the back of the pack. I think that for me, I’ll just stick with the others and pretend this one never happened. Frankly, there’s just no compelling reason for me to use it.