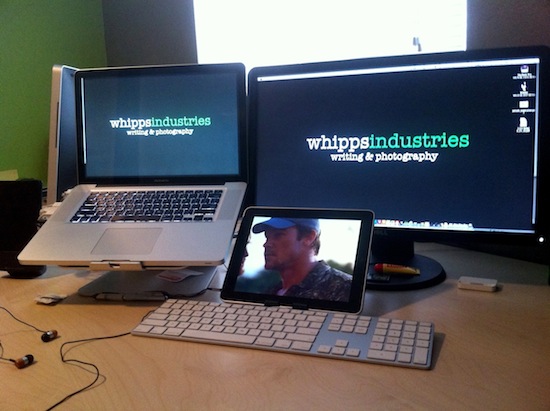 As of five minutes ago, this was what my desktop looked like. Admittedly, it’s a bit more scattered than I typically like to see, but it’s still pretty functional. Here’s what I’ve got going down.

I like to watch movies or TV shows while I’m working, because it does a good job of being background noise to filter out the kiddo while my wife plays with him. Recently, I’ve been streaming Netflix on my computer while working, and that’s been causing the temperature to spike up to 170 degrees. The other problem is that I’ve been using Spaces to coordinate my screens, and when I switch desktops, I have to pause the video, etc. Today, I seem to have found a pretty decent option to fix my problems.

I’m 6’1, and when I sit up straight in my chair I can still see the entire 23-inch Dell screen behind the iPad, meaning that I’m not losing any screen real estate. The iPad is sitting in the stand that comes with the incase Travel Kit Pro, Â which angles it back far enough to be visible while I’m upright, but not distracting. Originally, I piped the sound through my external speakers, but I switched to a pair of headphones so that I could deaden the outside sound even more. For those that are wondering, I’m watching Fastlane on Netflix – one of the best TV shows ever to be cancelled.

I like playing around with my setup every now and then and trying out new things. Today, this works out pretty well. Who knows what I’ll think tomorrow, but then again, tomorrow is just another day.