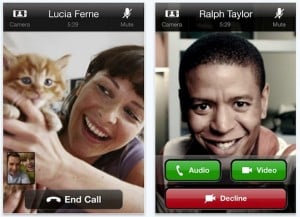 Not one to take VOIP and video conferencing competition lying down, Skype has brought video calling to its iOS App.

Skype has updated its iOS App to support video calling to any Skype client on any OS – a far wider reach of devices than those supported by Apple’s FaceTime. The update requires iOS 4.0 and a device with a video camera (4th generation iPod Touch and iPhone). For those iOS devices without a video camera, you can receive a live video feed of your participant.

Besides the massive number of supported of devices, Skype has another feature that sets it apart from FaceTime: 3G support. FaceTime on the iPhone is limited to a WiFi connection but Skype supports 3G and Wifi connections for video calls.