RUMOR: Ultra Portable Macs? SPECULATION: Is it the next iMac? 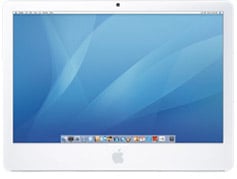 Rumors were flying earlier this year about the possibility of Apple releasing an Ultra-portable Mac at Macworld 2007. The topic was brought up again on the Mac Roundtable Podcast this week, and it got me thinking. While I don’t think we’ll be seeing one at Macworld ’07 (I think the iTV and the iPhone will be quite enough for one event), I do think ultra-portable Macs are in Apple’s future. The real question is not so much, “will we see them” as it is, “why do we need them”?

I mean, seriously, the 13-inch Macbook is already pretty darn portable. Plus, price is an issue. Most of the ultra-portable PCs that have been released so far on the Windows side of things have been as expensive, if not more so, than their Notebook counterparts. So exactly how would an ultra-portable Mac benefit us, and what purpose would it serve?

Well, an ultra-portable Mac could be the next generation of the iMac.

If you look at the iMac’s evolution, the machine has been constantly evolving…getting smaller every 2 or 3 years. The current version of the iMac is essentially a monitor on a stand with everything built inside it. It is an amazing piece of design and engineering…but if it was just a little bit slimmer…and weighed just a little bit less…it would be an ultra-portable Mac.

An ultra-portable (as they’ve existed so far) tend to look like a tablet PC with no keyboard, or a tiny (and usually useless) mini keyboard tacked on somewhere. With Apple’s design history it’s very unlikely that any ultra-portable from the company is going to have the same type of mini keyboard interface…but imagine an ultra-portable Mac that you could take around the house with a tablet-like interface, and an on screen keyboard for typing in URLs and for chatting. You could take it wherever you needed to go…and when you were home and not using it, it could sit on a dock at your desk, charging. Sitting in front of that dock? A wireless mouse and keyboard…and you have a full desktop system, that isn’t all the different from a current iMac set up. In this way it could be a complete desktop replacement, perfect for any typical desktop use.

The iMac is due for a new design (based on Apple’s previous design cycles for the product), and an innovation of this kind is the next logical step for the iMac in my opinion.