RipIt – DVDs on your Mac 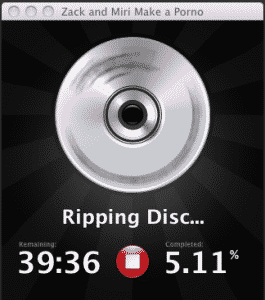 I’ve been working on setting up a Mac media system in my house, and no matter what I do, I just can’t make it work the way I want. The AppleTV is great, but I first have to rip things via Handbrake – which takes as long as the movie takes – and then I have to play with the settings until it’s perfect. It’s a good solution, but ultimately, I just want to put my DVD in the drive, and burn it to iTunes just like I did with my music library. For the immediate moment, that’s just not going to happen.

So I started trying out other options, and that’s when I found out about RipIt. It’s one of those cool little Mac apps that does exactly what it describes – it rips DVDs straight to your drive. They have a free trial version that allows you to rip 10 DVDs before it requires licensing, so I downloaded a trial and gave it a shot. But what makes RipIt so different from Handbrake or Toast?

The most obvious thing is the price. At $19.95, this is a lot cheaper than Toast. Although it doesn’t offer a lot of the flexibility of that program, it does burn your DVDs to your drive, which is ultimately, all I need. Secondly, these are straight DVD copies, not just video files like Handbrake produces. That means that you can burn all of those extra content DVDs included with most movies today, as well as TV show DVDs, something which I’ve always wanted to do, but never been able to using Handbrake.

How does this fit into the home theatre picture? I’m running an AppleTV, so anything that’s in my iTunes library can stream into the box and onto the TV. That works out great, but I can’t put a RipIt file into iTunes, so how would you make that work? My answer – I think – is to buy a Mac Mini and use it for my new home theatre. That way, I can still watch movies from iTunes, but I can also watch DVDs ripped from RipIt, giving me flexibility as well. It’s not an ideal setup, but I think that for a Mac, it’s probably the best option out there right now.

If you have any other ideas, feel free to let me know. I’d love to learn more.