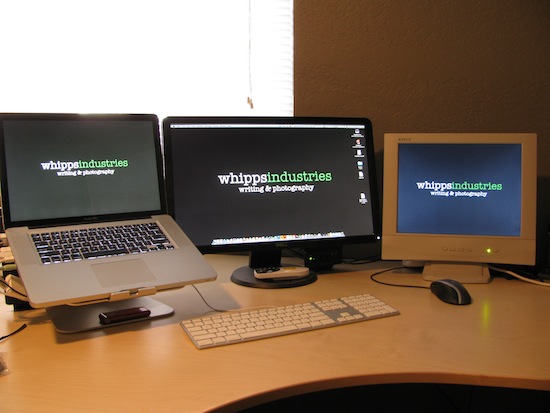 I love my two monitor setup. Having my laptop on a stand and my 23-inch Dell next door increases my productivity and makes me feel like I’m getting more accomplished. But one thing I also like is symmetry, and this current setup just doesn’t have it. What I really want is to have a matching Dell next to the first one, with my laptop running in closed mode. But no matter how many people I spoke to, they all said that running two monitors off one MacBook Pro just wasn’t possible.

Back in February, I did a review on the iMo Pivot Touch monitor, a 7-inch USB-powered display that I used mostly for IM programs. It was a cool option, but ultimately I still yearned for that second Dell. It did prove though that a third monitor was possible to do with the computer, I just needed to do it via USB. Around that same time I was flipping through Other World Computing‘s catalog when I found the Newer Technology USB to DVI/HDMI/VGA Adapter. A few e-mails later, and a demo model was sent my way.

First, let’s talk about the device. It’s not very large – 2 inches long, maybe 1.5 wide – and has a female DVI port on one end, with a USB tail out the other. It comes with an install CD and two other adapters: one for DVI to VGA, the other DVI to HDMI. Upon reading the instructions, I discovered that I needed a newer driver because I’m running Snow Leopard, so I downloaded that from a website, no problems.

The computer is a 15-inch MacBook Pro, 2.4 GHz Intel Core 2 Duo with 4 GB of ram and running 10.6.3. My test monitor was an older Kogi flatscreen LCD that my father bought a few years back. It’s not pretty, but it was just one stage of my test and it fit one of my requirements – it had a VGA input. I hooked up the monitor via the adapter, and took the picture you see above.

Right away I was excited. It worked! Now I could run my third monitor and get everything setup the way I wanted it. I started tweaking the colors a bit, playing around with this and that and realized that it just wasn’t going to work. “Crappy monitor,” I thought to myself. Then I noticed the mouse cursor stuck on the edge of the screen, even though the real mouse cursor was moving just fine on the middle screen. The other issue was the slow speed of the mouse itself. It showed artifacts behind it, like the monitor just wasn’t able to keep up with what I was doing. I decided that to root out the problem, I needed to eliminate the Kogi monitor from the equation and try something different. Fact is, it could be just that the monitor was horrible.

I disconnected the Kogi and my Dell as well. I then reconnected the Dell to the Newer Technology adapter, then fired it back up. Right off the bat the resolution was off so I changed that, although it never really got quite right. Then I tried playing with the colors, and as I was doing so, I noticed something: 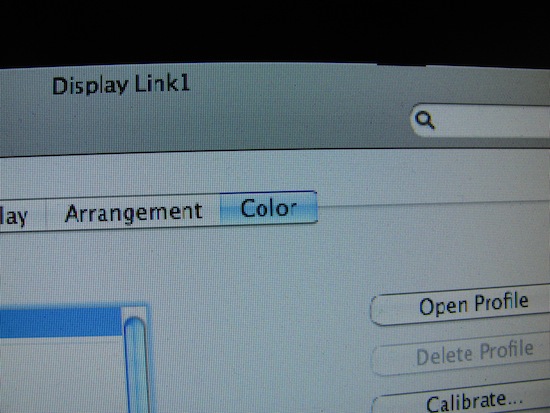 Notice the “r” in Color and the “n” in Link? Or the weird curves on the Open Profile button? That’s how it all displayed on the screen, no matter how many tweaks I did. And I also had the same issue with the mouse and tracking. It just wasn’t able to keep up, no matter how hard I tried. It just wasn’t up to specs for a full-time monitor.

So there are a few different ways to look at this adapter. You can either get it, be willing to tweak it a bit and use it for just a display, or pass on it until the technology catches up a bit. At $85, it’s not the cheapest thing you can buy, but I also don’t think it’s quite ready for prime time yet, either. That’s too bad, too, because this concept has a lot of potential.