Awk is a pro terminal command for data processing built right into your Mac, but that’s not all it is. It also has the power and capabilities of a general-purpose programming language. And while you won’t be writing the next big app in awk, you get access to an incredible range of functionality within the language.

The awk language is built to take input in the form of data and run actions based on that input. When processing text, awk will beat out a general-purpose language for simplicity and directness. Awk is also an interpreted language, skipping the compiling and debugging process of a compiled language like C.

When you call awk from the command line, you’ll follow the basic scheme below:

Awk executes the action when the pattern is found in the file specified. In the absence of a specified file, awk will run on the Terminal’s standard input. Pattern-matching is extremely flexible, supporting detailed and complex matching structures. Let’s consider a simple example below:

This one-line awk program prints any line in the file emails that contains the string com. The $0 specifies the entire line, but that’s also awk’s default behavior when finding a pattern match. If we had specified only '/com/' emails we would receive the same output.

One of awk’s most useful features is identifying field separators and parsing data based on fields. This allows users to print out specific cells of data in long documents, like CSVs you might open in Excel. To start out, we will use the simple /etc/passwd file for this example.

Open the passwd file in TextEdit and you’ll see lines of data separated by colons.

Those colons are the field separators. They tell a parsing program like awk or Excel when to begin and end cells. Each colon stops the previous field and starts a new one, just like periods in English both indicate the end of a sentence and provide for the beginning of a new sentence.

We need to tell awk what character to use as a field separator; otherwise, it will default to white space. And you’ll notice there’s virtually no white space in the passwd file.

The flag -F indicates that the following character (: in this example) should be interpreted as the field separator. With the fields identified, awk can manipulate the data contained within those fields. In the above command, awk prints the first field, specified by $1. If you think of these fields as an array, this particular array starts at 1. 0 is reserved for the entire line, as we saw above.

Run that command in Terminal, and you’ll get something like this: 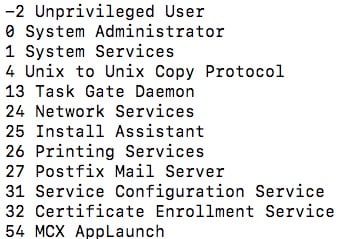 Let’s look at that awk program in more detail:

This program also prints a space in between the two fields to make the output more legible. Eagle-eyed readers will notice the double-quotes (") around the space. Double quotes make awk interpret the contents of the double quotes as literal. That means awk will print whatever is between the quotes exactly, rather than interpreting it as part of the program. Thanks to the double quotes, the space is a literal character within the print command and is printed as written.

If we want to get a little more daring with our pretty print, we can label our fields and include tabs between them to create columns:

This includes labels for identification in our output and separates fields with the \t character to insert tabs. And as with any command, we can save the output of awk to a new file using a caret (>).

Selecting and printing data is the meat and potatoes of the awk command. And we don’t have to just print numbered fields. We can also search for data within those fields using regular expressions.

If you’re unfamiliar, regular expressions are a search tool. By setting up a regular expression pattern, we can find any text that matches the defined pattern. And these patterns can get outrageously complex and, unfortunately, cryptic. Take the command below, for example, which includes a regular expression to match standard formatted US phone numbers. Looking at that, would you expect that result without being told? Regular expressions are powerful, but their syntax is often opaque. Even experienced users require regular syntax refreshers after a break from regex.

As mentioned above, this program will print any line in the file contacts that matches our regular expression searching for properly-formatted phone numbers.

If you’re new to regular expressions, this Stack Overflow post is a good starting point. You can also read a textbook on regex if you’re interested in the finer points. Returning users can check out this regex cheat sheet.

As expected of a programming language, awk can use operands to compare things. You have your standard operands ==, <, >, <=, >=, and !=. You also have access to the awk-specific operands ~ and !~, which mean “matches” and “does not match,” respectively.

The above program will prints all lines longer than eighty characters in the file data by counting the length of the line (remember, $0) with the built-in length function. We need not include a print command here. When no action is specified, awk will print the full line ($0) whenever it finds a pattern match. It’s like an automatic '{ print $0 }' appended each command until you specify otherwise.

Note that we’ve left off the awk command and quotations: we’re assuming this is inside an awk program at this point.

This command will print all lines where the first field equals the string “user.” The $0 is not necessary because print alone will output the whole line. Furthermore, without an -F flag, awk will use white space as the default field separator.

We can also write our commands in more familiar C-like fashion, using curly braces, indentation, and line breaks. This command does exactly the same thing as the one above, just with a cleaner and more legible presentation. Legibility and organization is especially important for long awk files saved as separate documents. So how do we save our awk programs?

Awk programs can be saved in files with their very own awk extension. This allows for complex, editable, repeatable programs. To create an awk program file, write your awk program in a plain text file and save it with the extension .awk. Then execute the file in the command line like so:

When using the -f flag (mind the lower case), awk grabs the specified file and runs it as an awk program. The commands in that program will process the file data.

If you desire, you can begin your awk programs with #!/usr/bin/awk -f in the manner of a shell script. This will allow text editors like vim to provide syntax coloring, and also allow you to execute the commands as a shell script. As with many programming languages, the # symbol is the comment specifier in awk. As a result, this heading has no effect on the awk program itself.

Awk comments start with # and last until the end of their line. Multi-line comments require multiple # symbols or fancy-pants programming.

Since awk is a full programming language, one post can’t hope to capture everything about it. Fortunately, some bright folks have written books all about the language’s use. You can explore the GNU documentation for awk for a detailed web-based guide.

More traditionally-minded users can thumb The Awk Programming Language, the textbook written by the developers of the program. Fun fact: the programming language’s odd name is an acronym of their names: Alfred Aho, Peter Weinberger, and Brian Kernighan

Pro Terminal: Install Linux Software on a Mac with MacPorts