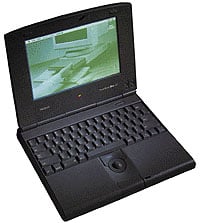 The “sub-notebook” rumors that just won’t go away are all anyone is talking about going into Macworld 2008. Recent Apple patent filings only further the rumor mill as they spin around hyping up this little device that we don’t even know exists yet.

Instead of rumor-mongering I thought now might be a good time to take a step back and take a look at Apple’s history with the sub-notebook. Apple has a long history with this kind of product, going all the way back to 1992 with the release of the very first Powerbook Duo.

The Duo was a sub-notebook that lacked most traditional ports at the time. It only included internal serial and fax/modem ports with everything being offered through several docking options. 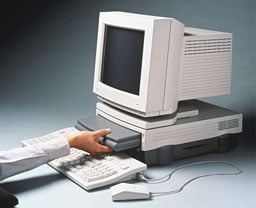 The Duo Dock was the largest and most expensive. It was a full featured monitor and docking station. the Powerbook Duo would slide into the docking station very much like a VHS tape into a VCR and then BOOM – you’d have a full blown desktop computer.

The Mini Dock was a much smaller dock that allowed you to connect most major ports at the time and an external monitor of your own, while the Micro Dock was a tiny dock that only allowed the addition of a port or two, such as a floppy drive.

The Powerbook Duo was produced from 1992 to 1997, and is very much in-line with what the current rumors are about the proposed Apple “sub-notebook”.

In the same way the one could argue that he Newton was reborn into the iPhone, we might be saying that whatever this new device is could be the Powerbook Duo reborn…we MIGHT say that…I doubt it, because I don’t expect there to be a “sub-notebook” at Macworld (13.3′ LED screens do not a “sub” make)…but if we do, you can bet it will be compared to its great, grandfather – the Powerbook Duo.