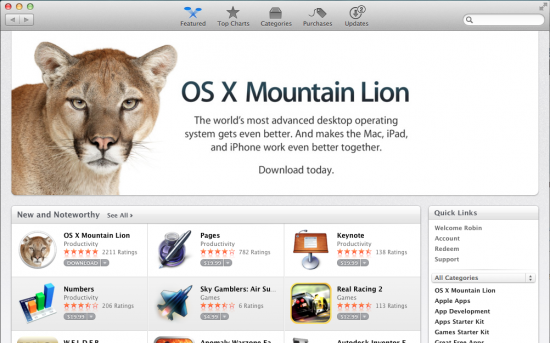 Consider this your Public Service Announcement of the day: the latest version of OS X, “Mountain Lion,” is now available to purchase and download. Details after the jump.

Just like OS X Lion before it, Mountain Lion — which is viewed as an incremental upgrade, instead of the significant new OS that Lion was — is available exclusively as a download from the Mac App Store. But this release is available at a record, bargain-basement pricetag: just $19.99. (Lion and Snow Leopard before it, by comparison, cost $29.99 each.) Making this an even better deal is the fact that Mountain Lion will upgrade systems running either Lion or Snow Leopard — the latter of which can get all the benefits of Lion with the new release, too.

The headlining features of Mountain Lion, which I outlined in detail here, include Notification Center, Messages, some significant iCloud upgrades, a whole new Safari, Gatekeeper, Game Center, and more. Ready to explore the more than 200 new features for yourself? Buy it now.