LinkedIn has an iPhone App 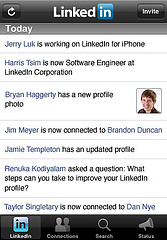 I was checking my e-mail the other day and saw that someone on my LinkedIn profile had recommended me. It’s a funny thing about LinkedIn – Everyone seems to have a profile, but no one ever does anything with it. But why not? Why do we constantly update our Twitter and Facebook feeds without giving out LinkedIn profile a second glance? Convenience, maybe?

Off to the iPhone I went, and that’s where I found it: LinkedIn has an app, and it’s free.

I downloaded the program and a few minutes later I was playing with it on the phone. It’s not a bad piece of work, with the ability to easily update status and look up colleagues. On the down side, you can’t change or update your profile, and, well, it’s LinkedIn. There’s no real reason to look at it as frequently as you would Facebook or Twitter.

It’s not that it’s a bad program, it’s just that there’s not much to it. Maybe if they change some things up it’ll get more exciting, but until then, I’m just glad it was free.