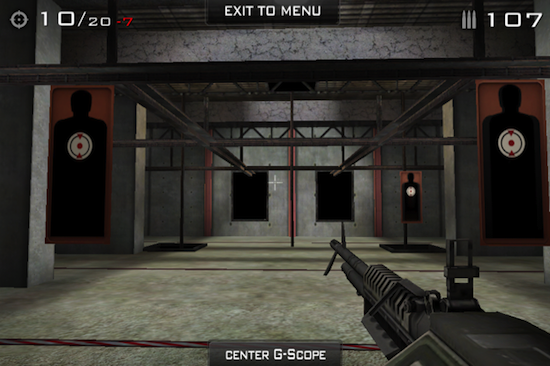 When the iPhone 4 was announced, one of the “big” adds was an internal gyroscope. This made some game developers giddy, while I just sighed and wondered what lame game was going to use it to their advantage. I was talking to a friend of mine about the iPhone yesterday, and he introduced me to the first game he knew of that used the gyroscope well: Eliminate: Gun Range [iTunes Link]. Guess what? It’s pretty cool.

The premise is that you have a gun, and you go to a gun range to shoot a few rounds into some targets that appear to be made of clay. At first, it’s a little tricky to control the phone, because you have to get used to the sensitivity of the iPhone’s gyroscope. But after a little bit of time, I found that it was pretty easy to swing around the screen. Occasionally, I found myself hitting the “center G-scope” button on the bottom of the screen, otherwise I was twisting myself in circles to center the gun.

As the game progresses, the levels get harder and you can get more guns. You have a limited amount of ammo, but the first level starts with a machine gun, so you have some leeway. This game gets addictive quickly, and I soon found myself playing for an inordinate amount of time.

For only 99 cents, it’s worth the cash. Fun app with a lot ofÂ re playability, making it good for me, and maybe you too.