How to Get Touch Bar Functionality on Your Old MacBook

by Alexander Fox 5 years ago3 months ago
1

A little while ago, Apple released MacBook Pros with the Touch Bar, a new method of interacting with the computer. The Touch Bar lives above your keyboard, replacing the function keys with contextually-aware software buttons that can trigger specific actions. There’s been some hemming and hawing about whether this constitutes a good features, but unless you have a new MacBook Pro, it’s impossible to try out natively.

However, you can add Touch Bar functionality to your old MacBook with some software solutions. With Touché you can add an on-screen Touch Bar to any MacBook running macOS Sierra. And if you want something you can actually tap, you can use a minor hack to get a version running on your iPhone or iPad. 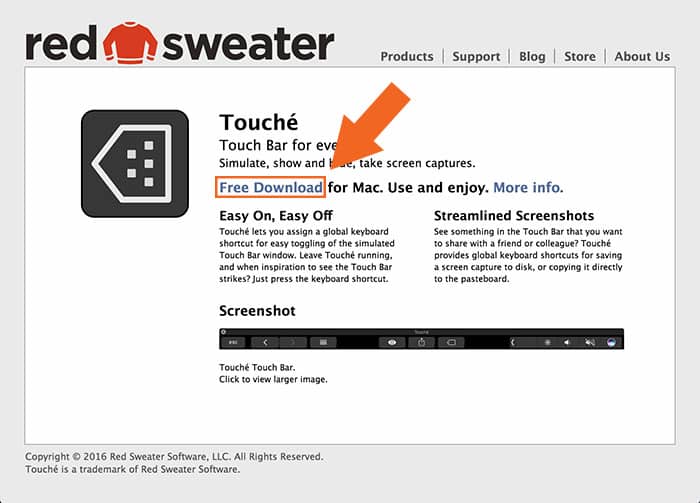 2. Install by dragging into your Applications folder. 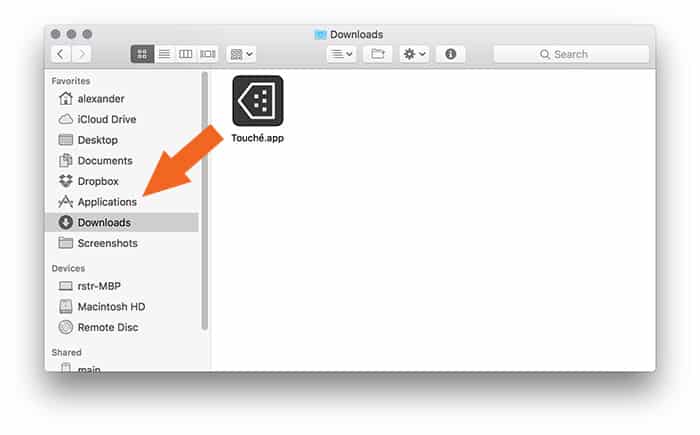 3. At this point you might discover that you’re running the wrong version of macOS Sierra. 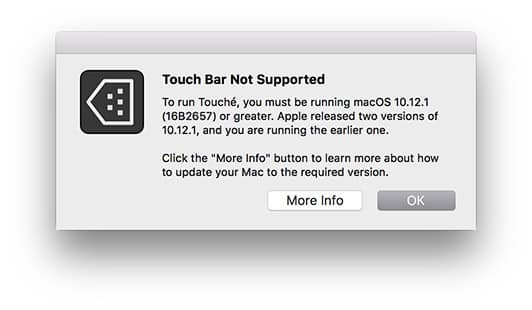 You’ll need to have macOS 10.12.1 installed, but you’ll also need the correct subversion, called a “build.” The correct build for this version is 16B2657, which can be downloaded from Apple. 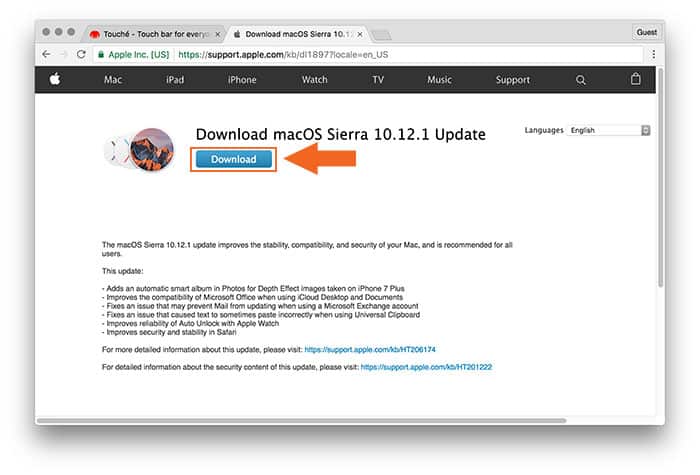 4. If you need to, install the updated version of macOS by mounting the DMG you just downloaded and running the contained install. Once your computer has finished restarting, continue.

5. Open Touché. You’ll see the Touché window, which contains the Touch Bar pop up at the bottom of the screen. 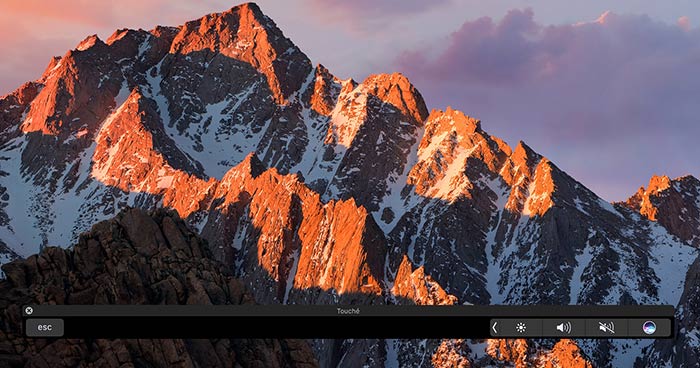 6. By default, the Touch Bar won’t look like much. But as you access different applications, you’ll see the Touch Bar change in response to your context. Go explore! 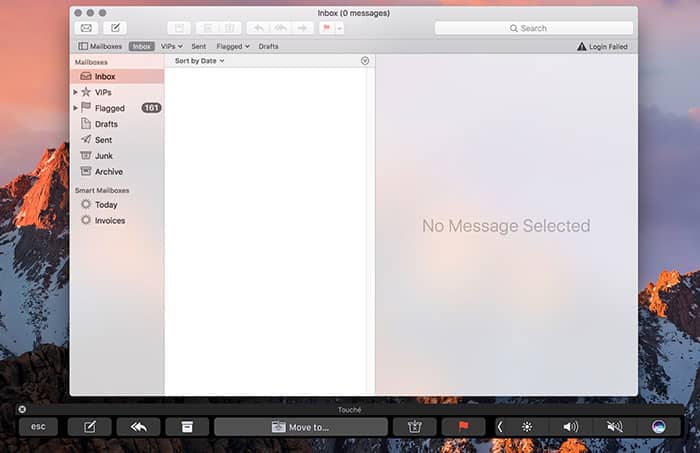 You can also use the accurately-named Touch Bar Demo App to run a software version of the Touch Bar on your iPad. While this is a hacked-together solution that you’ll need to build onto a properly-provisioned iPad or iPhone with Xcode, if you know what you’re doing, it’s a little closer to the real thing.

1. Make sure you’re updated to build 16B2657 of macOS Sierra 10.12.1. If you’re not, the application will not run. To check your build number, open “About This Mac” under the Apple menu and click on the macOS version number. 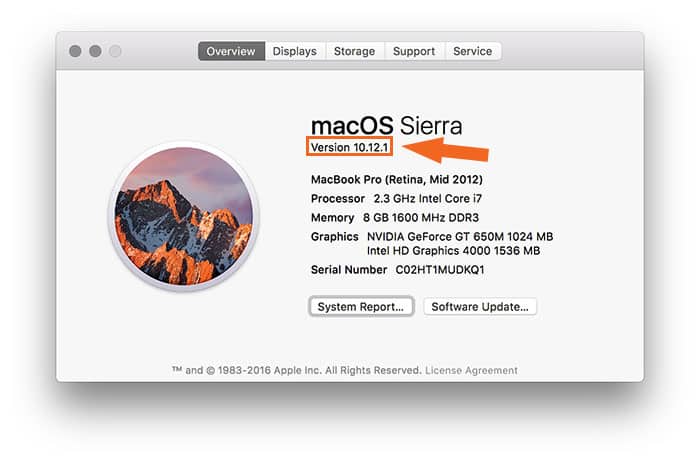 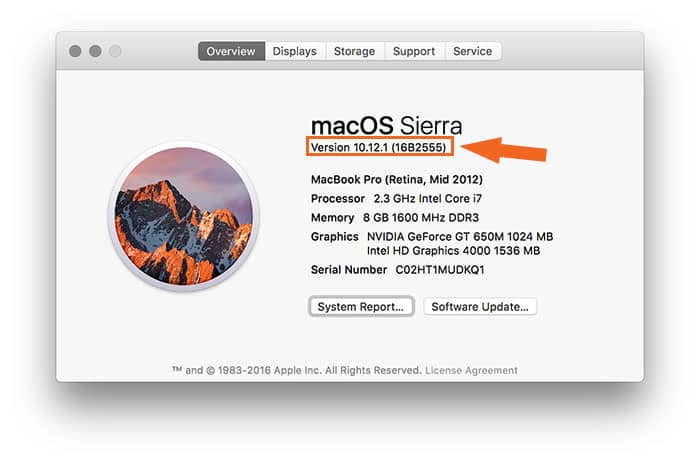 If you have a different build number, get the updated version from Apple.

2. Download the most recent release of Touch Bar Demo App from GitHub. You’ll need to download both TouchBarServer.zip which runs on your Mac and the source code which you’ll install on your iPad. 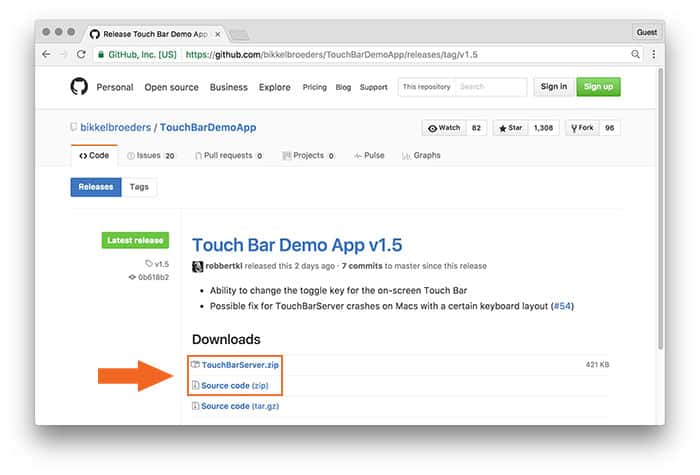 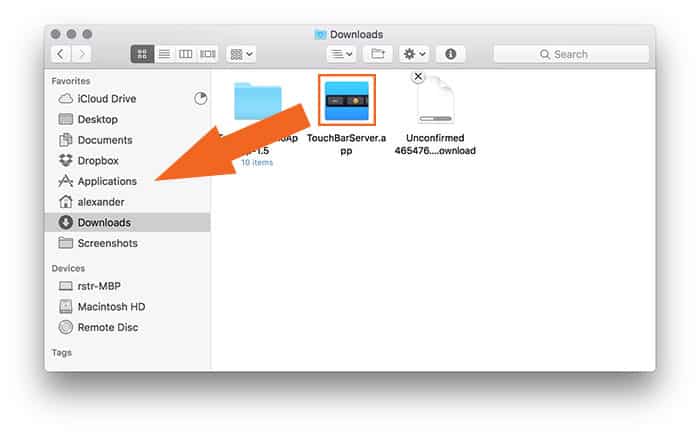 4. Connect your iPhone or iPad to your Mac via a USB to Lightning cable. In testing, this did not work with a 30-pin cable or a device requiring one.

5. Unzip the source code, then navigate inside of the TouchBarDemoApp-1.5 folder to open TouchBar.xcodeproj. 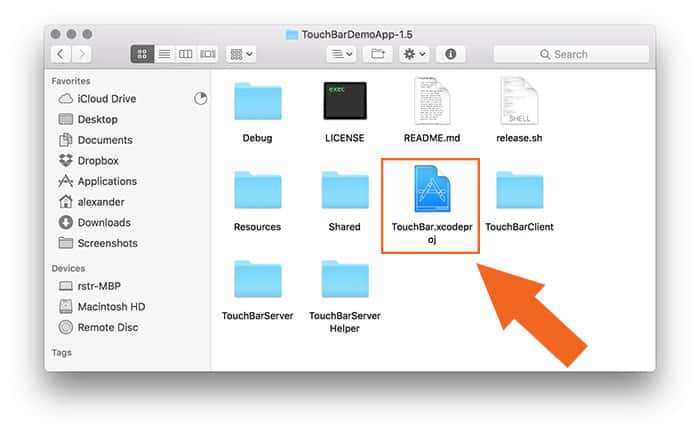 If you don’t have Xcode installed, you’ll need to download it from Apple with an active developer account.

6. Click on the name of the project in the left pane. 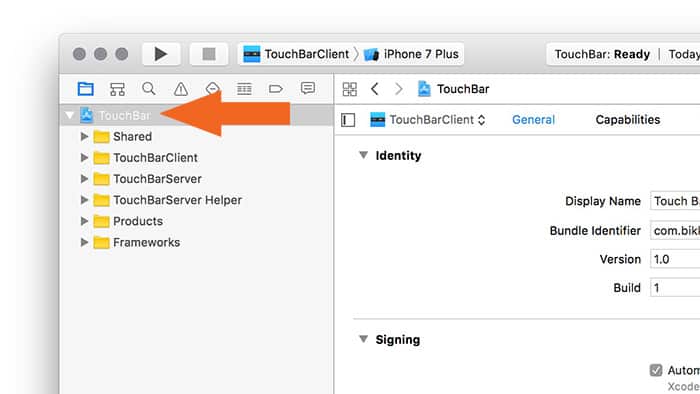 7. Click the Team drop-down in the middle of the screen under the Signing section. 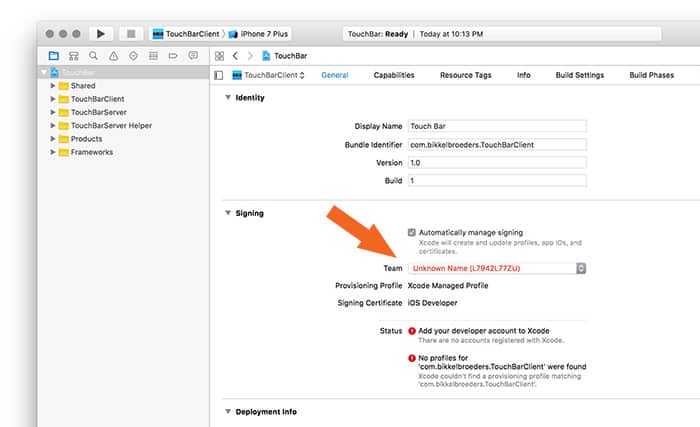 8b. Select your new Team from the drop-down menu.

9. Change the part of the Bundle Identifier that says “bikkelbroeders” (between com. and .TouchBarClient) to something unique. It doesn’t matter what, so your first and last name is a good option as any.

10. Click the device display next to “TouchBarClient” and choose the device connected to your computer. It will be at the top of the drop down menu, and will be named something like “Steve’s iPhone” in most cases. 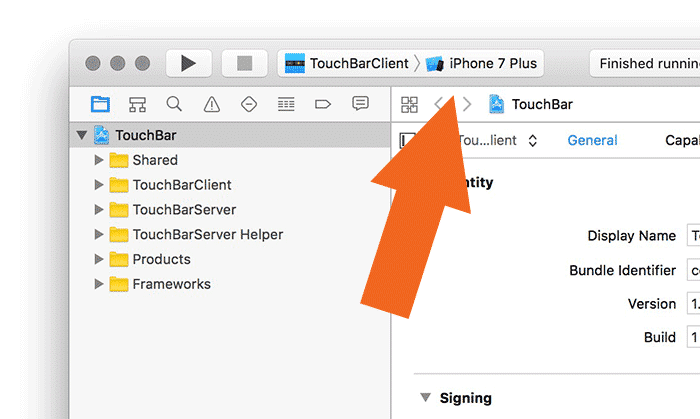 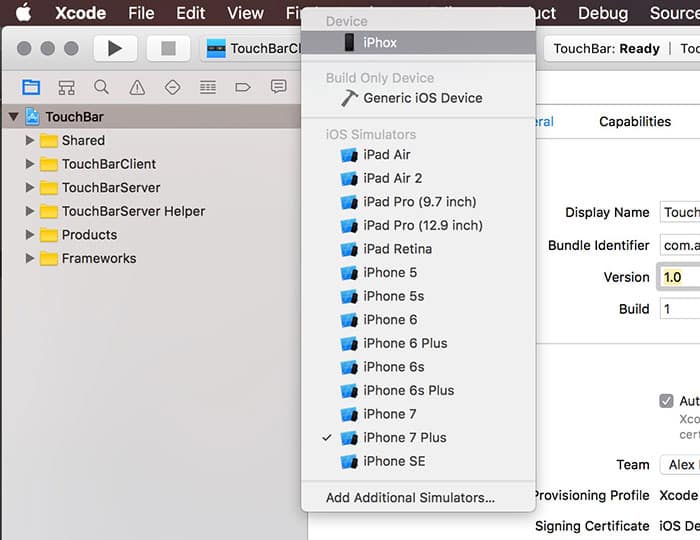 11. Once you’ve selected your device as the target, click the “play” button in the menu bar to build the app to your device. 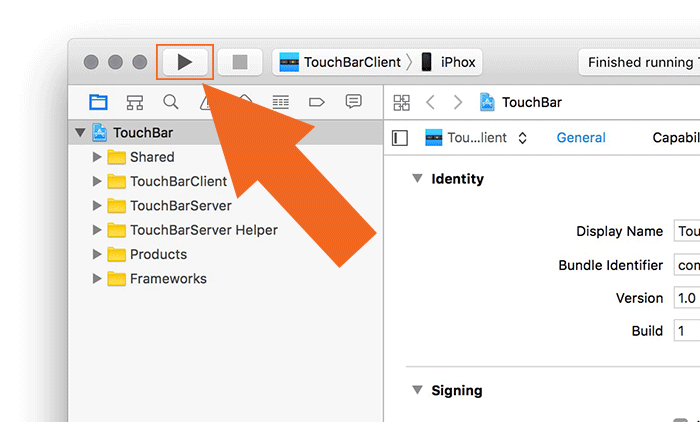 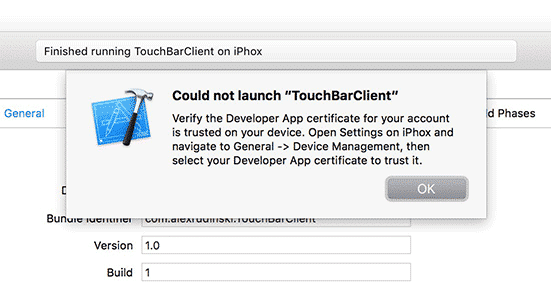 13. Launch the Touch Bar Client app on your iPhone or iPad, and launch Touch Bar Server app on your Mac. Make sure to keep your device connected to your Mac via the USB cable you connected earlier.

14. On your device, you’ll see a top-down view of a MacBook Pro with the Touch Bar. 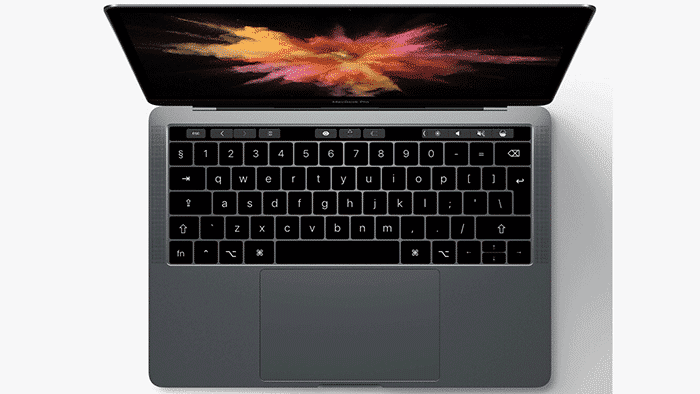 The Touch Bar, though small, will change in response to your actions on your Mac. This works best on a larger iPad, as you might guess. You can interact with the Touch Bar by tappings its icons, if you can manage to reach them.