Download on the Go: Apple Upgrades 3G App Downloading from... 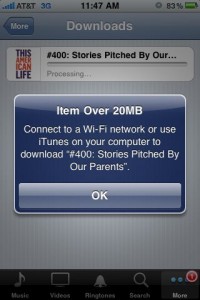 One of the more frustrating things about the App store for me was the limitations on downloads. I’d be out and about and want to install a new app, but I couldn’t because I couldn’t find a decent Wi-Fi connection. Now, that problem may be abated a bit, because Apple has upped the 3G download maximum level from 10mb to 20mb. From an article in Wired’s Gadget Lab:

Apple did not immediately respond to a request for comment regarding the change. Some theorize the cap was increased in advance of the release of the iPad tablet, whose games will likely be considerably larger in file size. The iPad is due for release in late March.

Makes sense to me. Of course, this brings up a bigger question, which is, how is AT&T going to handle all of this?
I live in Phoenix, and I don’t always have trouble with my 3G signal. But when I visit my parents in North Scottsdale, I might as well be in a cell-phone free vacuum because I never get a signal. It’s not like my folks live in a lead-filled building or anything either, although you could make the argument that my mother’s cat collection creates a fuzz-field impervious to 3G.
So if AT&T can’t handle getting a signal to my parent’s house – which is less than 1/2 mile from an AT&T tower, by the way – then how are they going to handle even more strain on the network? Between the iPad, higher OTA downloads and everything else, I just don’t know how it’s going to work. Oh, and then there’s tethering, which still isn’t here. Christ, if I had that, I’d up my rate plan with AT&T as a thank you.
Ok, I wouldn’t actually do that, but you get the point.
I think the next 6 months are going to be a big deciding factor with AT&T and Apple. On the one hand, Apple loves them because they drop out the lowest prices to their customers, and that makes Steve happy. On the other, his customers hate AT&T because of the crappy service. Frankly, this is Verizon’s big opportunity. Give Steve a good deal and watch 50-75% of AT&T iPhone customers flock to Verizon.
Kevin Whipps is a copy editor, writer, photographer and custom car builder based in the Phoenix, Ariz. area. For the past 10 years he's been building his portfolio, mostly in the automotive publishing industry. When he's not wrenching on cars, most of his time is spent discovering new gadgets and toys, and of course, using everything Apple. Whipps is also married, and has a baby boy, Kevin Whipps Jr., coming on February 7, 2010.