You are here: Home / Mac / Don’t forget that Mass Effect Galaxy was a sort of sequel to this whole mess 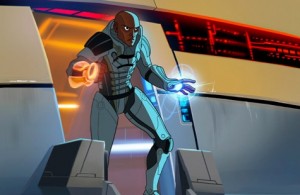 My mouse hand has carpal tunnel from too much planet scanning. No joke. And yet I can’t get enough of Mass Effect 2. I’ve been wanting to take the game wherever I go, but alas important things like work get in the way. When I sleep I hear the music from Afterlife thumping in the background and it makes me wonder if I was really there when I woke up. So yes I’ve become addicted, to some extent and if you’re like me craving for more lore into anything Mass Effect, you may have missed out on an iPhone application EA released several months ago. Mass Effect Galaxy tells the story of Jacob Taylor right after his retirement from the Alliance and how he meets Miranda before joining Cerberus.

The top down shooter is simple to use. Jacob fires automatically, and it’s your job to guide him using the accelerometer as he battles Batarian pirates and unravels a conspiracy. What I especially liked: the stylized cartoonish treatment of the cutscenes, in the same way that we’ve seen many artist renditions of Star Wars.

If you’re craving for more Mass Effect, you may have missed this. Grab it now.