Could iOS 4.2 For iPad Be Delayed?

by Tanner Godarzi 12 years ago8 months ago 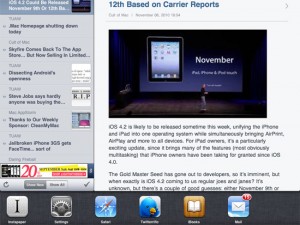 iPhone World reports on a rumor that iOS 4.2 for iPad won’t be released until November 24th – a week away.

Friday, Apple seeded out a new build of iOS 4.2 aimed at fixing a WiFi connection issue plaguing the iPad. However, the public release of iOS 4.2 may not come until November 24th. This would give Apple more time to test for any other issues and developers more time to ensure compatibility between iOS 4.2 and their Apps.

The latest release of iOS was previously “delayed” due to a bug that prevented iPads from connecting to a WiFi network or maintaining an internet connection over WiFi. I’ve been using the original Gold Master release of iOS 4.2 and while I love the addition of Folders and multi-tasking (it runs buttery smooth if you’re worried about lag) the WiFi bug makes connecting to the internet over anything but a 3G signal a pain.

I ran in to this issue the first day of using the GM build of iOS 4.2 – it’s an annoyance. I’ll be writing my take on the latest release of iOS for iPad once the final GM build is released. Check Apple Gazette for my full review.