The Best Markdown Editors for the Mac and macOS

by Alexander Fox 6 years ago8 months ago

In most text editors, you style your text with formatting tools. For example, you might select word, click the “bold” button to make it bold, and move it. All this formatting relies on invisible “markup” that hides behind the scenes in your documents. This works great most of the time, but if you’ve ever tried to convert a Word document into valid HTML, you know what a headache it can be.

Markdown tries to solve this problem. Invented by Apple enthusiast John Gruber, it’s a method for styling text based entirely around text-based codes. Web savvy users will recognize this idea from HTML. The similarity is intentional: Markdown converts smoothly into HTML.

Markdown simplifies text formatting by creating a clear, texted-based method for formatting text, indicating where headings, links, images, lists, and other stylistic elements are placed. And better still, even an unconverted Markdown document covered in formatting marks is still completely legible, with a clear hierarchy.

Since it’s a totally text-based toolset, it’s possible to write valid Markdown in any text editor. However, it’s much easier when you have a specialized text editor to help you along. Here are the best Markdown editors for the Mac and macOS. 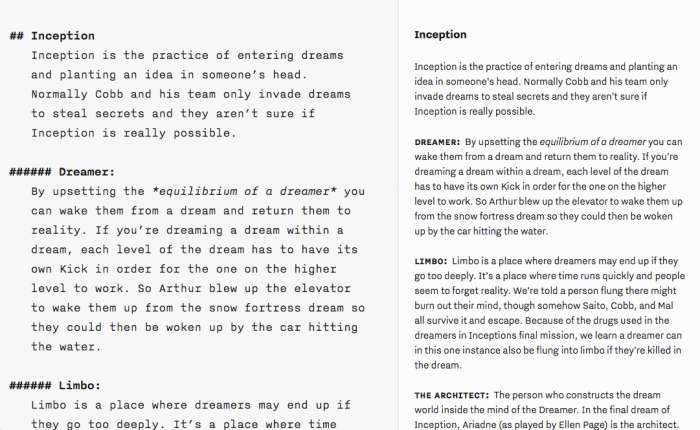 Most Markdown editors are essentially super-charged plain-texted editors, and iA Writer isn’t all that different. Like many of the best Markdown editors, iA Writer goes in for the “minimal” approach to text editing. You won’t find controls to adjust the font size, nor do you have a lot of power over your workspace. The intention is to help you focus on your writing, not extraneous formatting. And once you’re used to that idea and aesthetic, using Word feels like starting up a tank to drive to 7-11.

iA Writer includes a helpful set of keyboard shortcuts for formatting text and allows you to easily insert images into your posts. The preview mode, which shows how your styled text will appear in HTML, is clear and easy to use, and the side-by-side view simplifies making changes. There’s also a unique feature called syntax control that detects the different parts of speech in your writing, helping you identify poorly-worded sentences. And integration with WordPress and Medium makes it possible to publish directly from the application.

In the years since its release, iA Writer has gained a significant following. Apple named it the top plain text editor for every year from 2011 to 2015, which is no mean feat. If you’re looking for a straightforward Markdown editor, this is a great place to start, even with a $10 price tag. 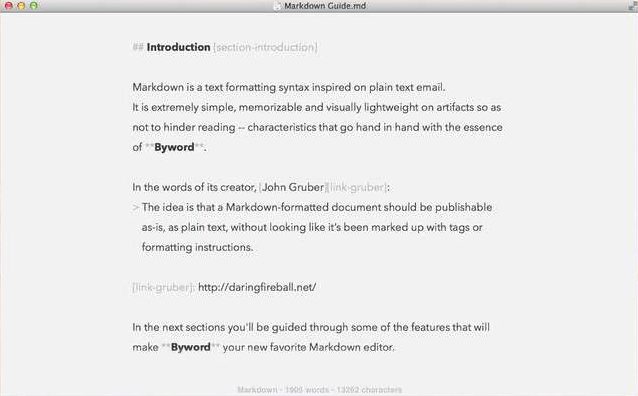 But while Byword might be one of the best Markdown editors for macOS, it isn’t flawless. Word counts can be wonky, and exporting as a RTF or Word document requires users to apply formatting that makes their previewed documents look incorrect. Plus there’s some formatting quirks, like using a double space at the end of a line to manually create a <br> tag. However, the extra integration is useful, and it will be invaluable if you need it. 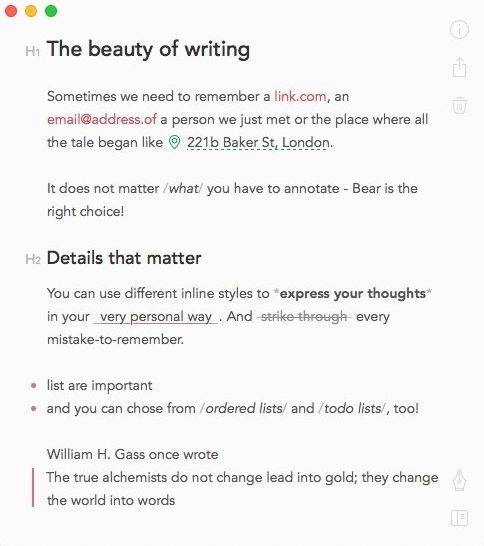 Bear is less a Markdown editor and more a multi-platform note-taking app infused with jet fuel. The entire user experience is designed around creating multiple simultaneous documents that are intelligently organized, so it has a lot more in common with Evernote than TextEdit.

Bear organizes notes with hashtags. It’s not a new idea, but the implementation is elegant. If you include a hashtag anywhere in a document, then that document will automatically be added to that tag’s category. It includes built-in syntax detection for 20 different programming languages, and it’s smart enough to automatically detect addresses, links, and hex colors to make note-taking more powerful. Yet even as a note taking app, it still ranks as one of the best Markdown editors.

The big selling point here is the excellent mobile app. It’s truly beautiful, and user interaction is well-designed and smooth. The free version, however, is completely missing any sort of sync or backup capability. Users will need to drop either $1.49 per month of $14.99 annually to get access to that feature, as well as any kind of export capability. The app is extremely limited without it, so you might consider that a mandatory purchase. 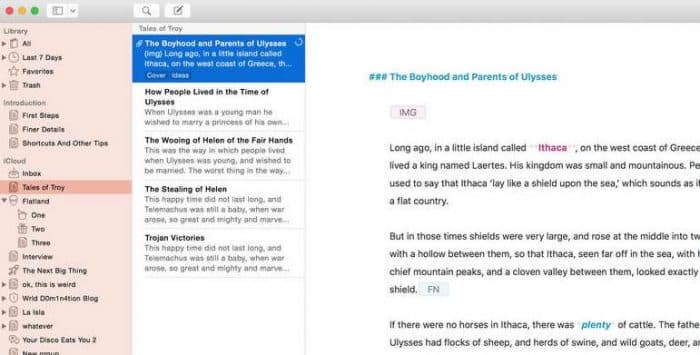 Ulysses is the only major Markdown applications built specifically for long-form writers. Users write small blocks of text, and then connect them together to form a longer whole. For example, a novel writer might use one section per chapter, making it easier to work on isolated sections of the book. Users can export text files in the ePub format, and the Markdown engine can easily handle dozens of images and footnotes. If you’re writing long-form non-fiction, this is incredible. But for short form writers, the $45 price tag will be coffee-chokingly steep.

iA Writer is easily one of the best Markdown editors available for the Mac. When you need a super-powered note-taker, Bear is for you. And long-form writers will benefit from Ulysses’s specialized features.