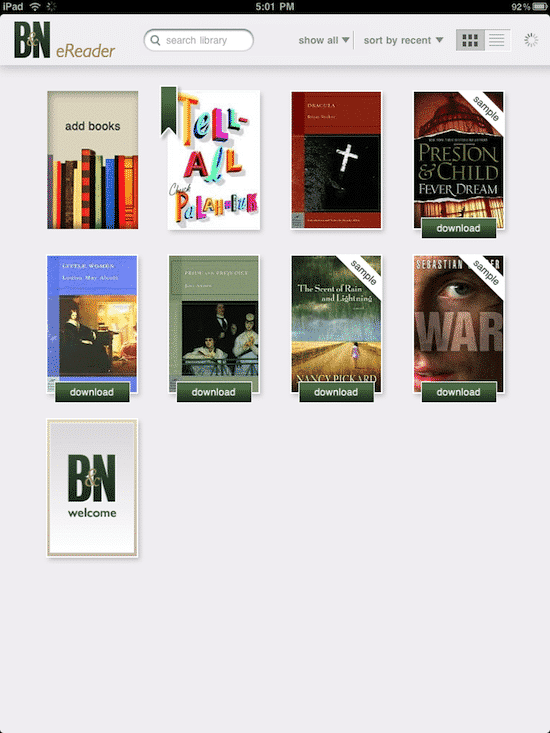 When Apple introduced the iPad, it was instantly touted as a competitor to the Amazon Kindle and Barnes & Noble Nook. The difference between the iPad and those other devices though is that the iPad can run other programs – including those by Amazon and Barnes & Noble – making it an all-in-one proposition. Barnes & Noble released an eReader program for the iPhone a while back [iTunes link], but now they’ve released a version for the iPad as well. My mother first told me about this early yesterday, so I downloaded the program, gave it a whirl, and here’s the results.

The iBooks system is almost an identical copy of the iTunes store in that you buy an item, download it to your device, and use it right there and then. If you sync the device to your computer, you then can sync the item to other devices in your chain. It’s quite simple.

Barnes & Noble iPad app [iTunes Link]Â  is a bit different. You go to the B&N app on your iPad and click the “Add Books” icon. That takes you to Safari and the B&N website, where you choose your book and pay for it via a credit card of your choosing. You then open up the B&N iPad app, download the book, and type in the credit card number to confirm that it was actually you who purchased the book. Then you read.

This is not a simple process, and syncing the book to other devices is just as much fun. There is an app for the iPhone and Mac OSX (as well as the PC), so you can download those same books to whatever device you want. The same process applies – the verifying of books with your credit card – but otherwise, you can have one book in multiple places. This does bring up a bit of a problem if you’re the type to have multiple credit cards, as you may not be able to remember which book was purchased with which card. And should you download a book to your iPad and then decide a month later you want to read it on your Mac, that can be a tough proposition. Although this is just a different way of handling DRM, it isn’t a very Mac-like experience.

The book reader, however, is a different story. Flipping through the pages of a book I downloaded was simple. Want to bookmark a page? Click on the plus symbol in the lower right corner and it dog ears the page for you, just like you might on your own book. Want to search for a word in the dictionary or on Wikipedia? It’s right there. You can even highlight a word, although highlighting passages didn’t work for me unless I clicked on each word. There’s even a theme selection, making the text look like it’s on a Nook, white text on a black page for night reading, or other aesthetic choices.

Thing is, it doesn’t quite feel like a book the way iBooks does. The pages don’t flip, they slide. And when you turn the iPad horizontal, you spread out the page which in some cases can leave quite a bit of negative space on the top and bottom of the screen. It’s got some nice features, but it’s not quite as polished and clean as I would like. It just doesn’t feel like I’m reading a real book, like it does in iBooks.

But where the B&N app shines is the selection. Look up almost any of my favorite authors in iBooks and I can’t find them. B&N not only had them, they had enough selection to make browsing through the virtual racks a real experience. When I’m in iBooks, I feel like I’m in that second-hand bookstore down by the Whole Foods that doesn’t have a copy of Twilight, but does have 13 copies of Tom Jones’ biography.

Ultimately, I’m going to use the B&N app, if only for the selection. Until iBooks gains more books on the virtual shelves, it just doesn’t fit all my needs. And even though the B&N app sucks everywhere else, it does have enough to choose from that I can look over some of the flaws. Besides, it’s free – there’s not much to lose by just trying it out.