Avoid the Car Crash Play With the â€œTraffic Rushâ€ App

The Hit Game â€œTraffic Rushâ€ is now Free, for a limited time, and it is currently riding along at Number One atop the Top 25 Free Downloads List in the Apple Store!

Think moving cars through an intersection during rush hour is easyâ€¦then try doing it at a busy intersection where the stop light and traffic signs are not existent.

You would not think the anti-Frogger game would be as addictive, but it is. Part of the reason will have to be the new responsibility given in this game for the iPhone: the player is not controlling one figure, or frog, and getting them to safely cross traffic; instead each and every car, motorcycle, truck and vehicle is under the playerâ€™s control.

The game is fairly simple: prevent disastrous, glass spattering, explosive traffic accidents. The player must choose to tap a Suzuki speeder bike on the screen in order to get it to temporarily stop, and then tap it again to get it moving. Pushing a finger across the phoneâ€™s screen on a ruby red car will rocket it forward forcing it to speed on. 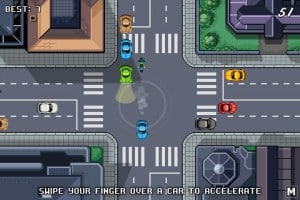 Once numerous vehicles start heading toward one another, in the doom scenario, it gets extremely tough (and addictive) to try and avert catastrophe!